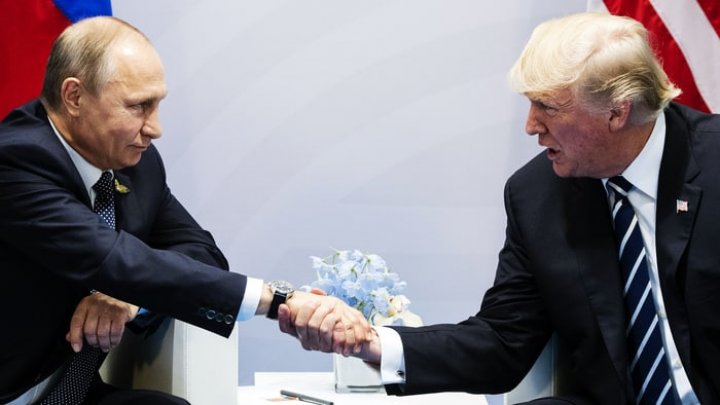 Donald Trump has called Russian President Vladimir Putin to congratulate him on his election victory, but did not discuss the recent nerve-agent attack in Britain, the Kremlin said.

A press release from Mr Putin's office said the two leaders had talked on Tuesday "at the initiative of the American side". The two did not discuss the poisoning of a Russian double agent in Salisbury, which British officials have said was "highly likely" tied to the Kremlin, Mr Putin's press secretary told Interfax.

Mr Trump confirmed that the two had spoken, telling reporters at a press conference that he planned to meet with Mr Putin in the "not too distant future" to talk about the global rams race and tensions with North Korea. He did not mention the attack.

Mr Putin's  office said he and Mr Trump had discussed everything from terrorism to energy development. The call was "constructive, businesslike and focused on overcoming the accumulated problems in Russian-American relations," the Kremlin said in a statement.

The call came shortly after British Prime Minister Theresa May chastised Mr Putin over the poisoning of double agent Sergei Skripal. The Russian president has denied any involvement in the attack, which left Mr Skripal and his daughter in critical condition. But Ms May said on Monday there was "no other conclusion but the Russia state is culpable for what happened on the streets of Salisbury".

The prime minister expelled 23 Russian diplomats as a result.

Mr Trump has been more reserved in his comments, saying only that it "sounds like" Russia was behind the attack.

"As soon as we get the facts straight, if we agree with them, we will condemn Russia or whoever it may be," he told reporters last week.

The US president has been on the defensive about his relationship with Mr Putin, who he previously called "a strong leader". The US Justice Department and Senate Intelligence Committee are probing allegations that Mr Trump's campaign colluded with Russia in the 2016 election – claims Mr Trump has repeatedly called a "witch hunt".

Mr Trump and Mr Putin's call came on the same day the Senate Intelligence Committee released its report on Russian targeting of the US election infrastructure. The committee deemed the US infrastructure "fundamentally resilient," but urged states to take "rapid" steps to secure their voting systems.