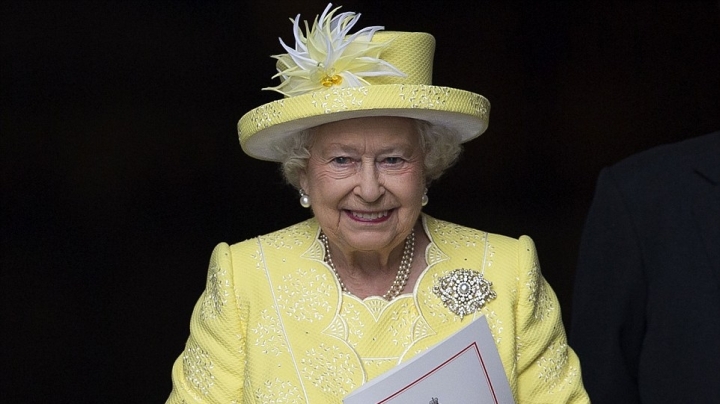 Prince William, Prince Harry and the Duchess of Cambridge led the arrivals at St Paul's Cathedral today as they joined hundreds of politicians and dignitaries in supporting the Queen and the extended Royal family for a special thanksgiving service to kick-off Her Majesty's 90th birthday celebrations, says Daily Mail.

Looking resplendent in primrose yellow, Her Majesty gave fans a royal wave and appeared in great spirits as she arrived alongside the Duke of Edinburgh – who is celebrating his own 95th birthday today – for the 11am service.

The ceremony, led by the Archbishop of Canterbury Justin Welby and attended by a star-studded congregation, kicks-off a three-day series of festivities in the capital to mark the Queen's 90 years.

Young royals such as Princesses Beatrice and Eugenie were pictured arriving at the service alongside the likes of David Attenborough, former prime ministers John Major and Tony Blair and television pundit Clare Balding today, while Amelia Windsor, the Prince and Princess Michael of York and Princess Anne were also in attendance.

During the special service, the Archbishop of Canterbury praised the way the Queen had ruled 'through war and hardship, through turmoil and change during the course of her 90 years' and asked the congregation to look back on her rule 'with deep wonder and profound gratitude'.

he Most Rev Justin Welby praised the Queen's dedication and service to the nation and he rejoiced for the way 'God's loving care' had 'fearfully and wonderfully' sustained not only the monarch but the Duke of Edinburgh.

Leading figures from national life gathered for the service, which heralded the start of a weekend of celebrations marking the Queen's milestone.

Joining the royal birthday couple in the congregation was Prime Minister David Cameron, who gave a reading from the New Testament, the Prince of Wales, Duchess of Cornwall, Duke and Duchess of Cambridge and Prince Harry.

The world of politics was represented by former prime ministers Tony Blair and Sir John Major, senior figures from the Cabinet including Chancellor George Osborne, and Labour leader Jeremy Corbyn.

Governors general from the Queen's realms were also among those invited, along with faith leaders and hundreds of ordinary people nominated by Government departments to recognise their service.

During the service, Sir David Attenborough also read Paddington Bear creator Michael Bond's personal account of growing up to be 90.

It was one of three birthday gifts featured in the ceremony for the monarch, and brought laughter from the congregation.

Sir David, who like the children's author turned 90 earlier this year, recounted one story about Bond's 'very polite' but accident-prone father, who always wore a hat, even when swimming in the sea, in case he met someone he knew.

The congregation heard another birthday present for the Queen, the anthem I Love All Beauteous Things, written to mark the monarch's milestone by Judith Weir, Master of the Queen's Music, who set to music a poem by Robert Bridges, poet laureate in the year the Queen was born.

The final gift saw Martin James Bartlett, the BBC Young Musician of 2014, perform the piece Burlesque by Arnold Bax, who was the Queen's first Master of the Queen's Music.

Prayers were read for the Queen and among those asked to take part was Hilda Price, a 90-year-old widow who shares her birthday with the monarch.

The great-grandmother may have been born on the same day as the head of state - April 21 1926 - but the two women have lived very different lives.

Mrs Price, who lives in Cardiff, was born in a house in Carmarthen, while the Queen was born in a town house in London's Mayfair, and grew up to become the wife of the Rev Ken Price, who served in a series of parishes in the Welsh Valleys and surrounding areas.