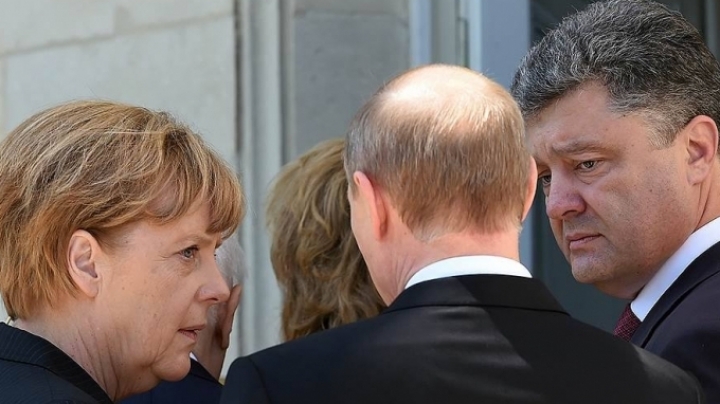 Russian President Vladimir Putin during a telephone conversation with German Chancellor Angela Merkel, French President Francois Hollande and Ukrainian leader Petro Poroshenko discussed the issues of political settlement of the situation in the Donbass, informs the press-service of the Kremlin.

The parties expressed support for the strict observance of the ceasefire, to give additional powers to the monitoring mission of the OSCE, as well as strengthening the joint center for control and coordination.

Putin urged to stop the shelling of settlements of Donbass Ukrainian military. The head of state stressed that a key element should be a direct dialogue of Kyiv with Donetsk and Lugansk, as outlined in the Minsk agreements of February 12, 2015.

In addition, the participants of the Normandy format was handed a package of proposals regarding local elections, special status, Amnesty and decentralization, which is aligned with the DNI and LC.

The parties also discussed possible steps to resolve the acute socio-economic and humanitarian problems in the South-East of Ukraine.

The Minsk agreement, reached during marathon negotiations in February 2015 the leaders of Russia, Germany, France and Ukraine, require the holding of local elections in the separatist-controlled regions of Donetsk and Lugansk regions. From Kiev to assign the special status of Donbass.

Poroshenko has repeatedly stressed that it will return control over Donbas territories, and by peaceful political means.

«It is absolutely clear position — military way for the return of Donbass does not exist», — said the Ukrainian President at the meeting of the Council of national security and defense on may 20.

The President said stressed that only peace plan will provide for the effective expansion of the special monitoring mission of the OSCE and enter the special armed police mission, which he has repeatedly said.