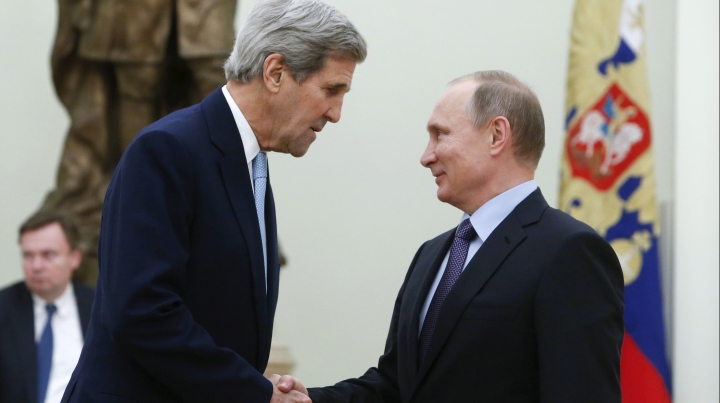 US Secretary of State John Kerry has met Russian President Vladimir Putin as part of an effort to salvage the stalled Syria peace process. The pair discussed cooperation against Islamic State and other militant groups.

Kerry met Putin on Thursday evening with a proposal to boost military and intelligence cooperation against "Islamic State" (IS) and al-Qaeda's affiliates in Syria.

In exchange, Washington hopes it can make Russia persuade Syrian President Bashar al-Assad to ground his planes and halt attacks on civilians and moderate opposition groups.

The three-hour meeting broke up at 1 a.m. local time, and the two gave little away. However, US State Department spokesman John Kirby said Kerry had expressed concern about repeated violations of the cessation of hostilities by the Syrian regime.

"The two also discussed the need to need to increase pressure on terrorist groups like Daesh and the al-Qaeda affiliate in Syria, Jabhat al Nusra," said Kirby.