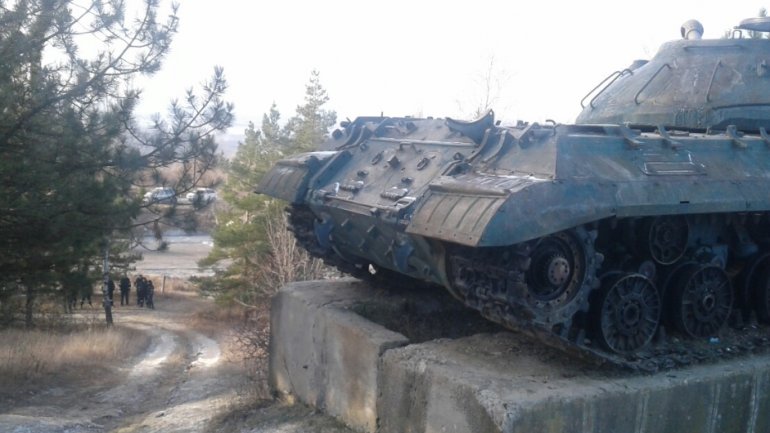 Many PSRM deputies and supporters stayed overnight near the tank place in Costesti village, Ungheni district. They found out that the Defense minister Anatol Salaru wants to take the tank and to bring him to the Museum of Military History in Chisinau. The socialists decided to not allow the dismantling of the machine from the Second World War.

At one in the morning a few socialists blocked the access to the army machine and say that they will not allow anyone to move it from there.

At nine in the morning soldiers and policemen came to start the dismantling of the army tank. At the scene also came many residents of the village who started to quarrel with the soldiers.

The residents of Cornesti village are also against the idea to take the army tank.

The minister Anatol Salaru declared for PUBLIKA TV that the tank will be repaired and taken to the museum:

"Not all socialists can go to Cornesti to see the vehicle, but they can go to the museum in Chisinau to see it. In this country there is law, there is property, it is the property of the museum. That is why we will ask for the law to be applied. The ones who are obstructing the law, the activity of the National Army Museum, should answer for it."

The socialist deputies say that they will not leave from there until the idea of the tank dismantling will be abandoned. Moreover, they went to the Ungheni Police Inspectorate where they wrote claims on the attempt of dismantling the combat vehicle.