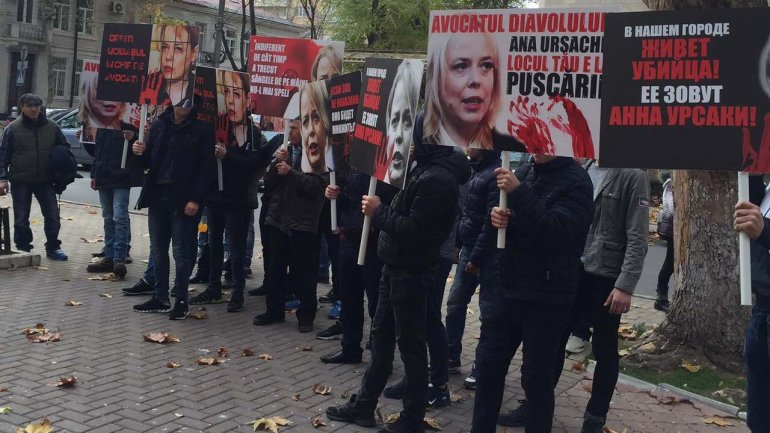 Many people protested today, 7 November 2016, in front of the General Prosecutor's Office and the Ministry of Justice. They requested for Ana Ursachi, known as Devil's Advocate, to be punished for the crimes committed. Moreover, the protesters also asked to withdraw her lawyer's license.

In front of the Ministry of Justice, the protesters also reenacted the murder of 1997 in which Ana Ursachi was involved together with her husband. On the other side, many members of Dignity and Truth Platform of mobsters Topa, and close persons of Renato Usatai and group of Petrenco requested at the Centre trial court the release of the lawyer.

At the request of lawyers of Ursachi, the magistrates cancelled the examination of prosecutors' request on placing the accused in preventive arrest for Friday, 11 November 2016.

It is not the first time people are showing their discontent towards the lawyer Ana Ursachi.

Last week, they protested in front of General Prosecutor's Office, and on the door of the building in which Ursachi lives appeared posters with the messages "Here lives the murderer Ana Ursachi" and "Go to jail".

The lawyer is accused in a case of murder conducted 19 years ago.