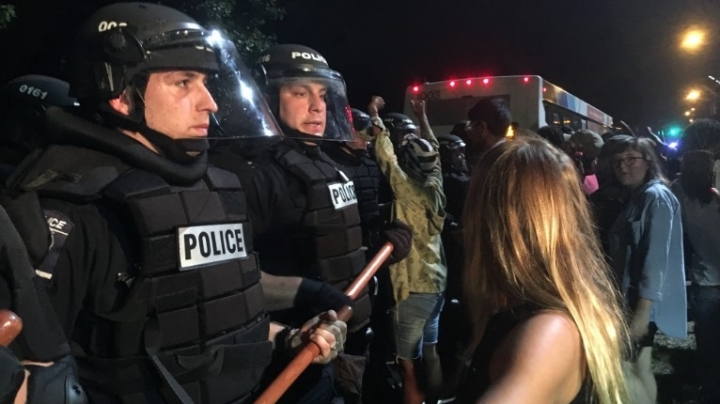 Protests erupted in North Carolina after an officer fatally shot one man while serving a warrant for a different person at an apartment complex in Charlotte, reports CNN.

Crowds gathered near the complex Tuesday night, chanting "no justice, no peace!" and carrying signs that said "Black Lives Matter."

Some threw water bottles and rocks at officers working to control the protesters.

The protests continued into early Wednesday as crowds blocked Interstate 85 and started a fire at the center of the highway. Vehicles and tractor-trailers stalled as far as the eye could see as police cars with flashing lights hovered nearby.

Some protesters removed boxes from the back of semitrailers and set them items on fire. Police in riot gear formed a line and forced crowds away from the highway.

About an hour later, the highway partially opened, but some protesters remained in the vicinity and continued chanting.

At least seven people were transported to the hospital with minor injuries, CNN affiliate WSOC reported.

Brentley Vinson, the officer involved in the shooting, has been placed on paid administrative leave, according to the mayor.

Charlotte's is the latest case involving an officer-involved shooting, and has attracted the attention of Black Lives Matter protesters who are demanding justice and an end to police brutality.

In Oklahoma, protesters gathered for several days following the Friday killing of Terence Crutcher by an officer in Tulsa.

Most of the protesters cited the case of Ahmad Rahami, the suspect in the New York and New Jersey explosions who was arrested alive Monday after a shootout.

The mayor called for a full investigation into the shooting, saying she'll work with authorities on the case.

"The community deserves answers and full investigation will ensue. Will be reaching out to community leaders to work together," the mayor tweeted.
AFLĂ imediat Știrile Publika.MD. Intră pe Telegram