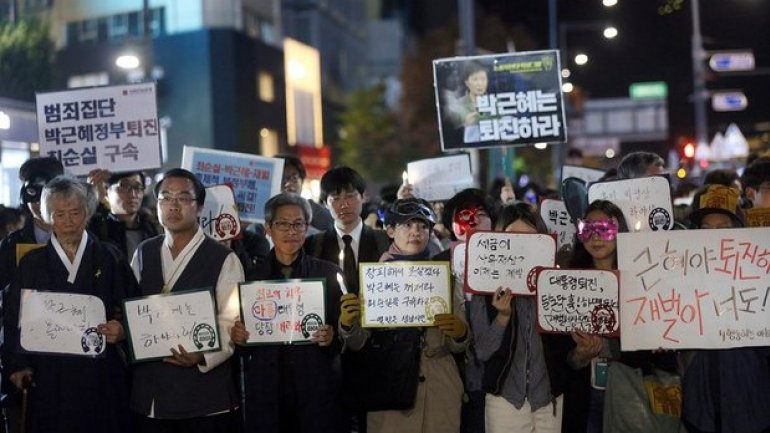 Police estimated that around 12,000 demonstrators attended the evening protest, according to the country's semi-official Yonhap news agency.

On Friday, Park Geun-hye ordered the resignation of 10 of her senior secretaries as political turmoil continued to grip the country.

"The President will carry out reshuffling the Office of the President in the near future," her spokesman Jung Youn-kuk told CNN.

Senior secretaries are essentially aides who coordinate policy between the presidency and government ministries.

Those ordered to resign include the senior secretaries to the president for policy coordination, political affairs, civil affairs, foreign affairs and national security, public relations, economic affairs, future strategy, education and culture, employment and welfare and personnel affairs, according to the presidential office's website.

Scandal this week gripped President Park, after she was accused of leaking official state documents to a friend.

Park on Tuesday admitted to sharing state documents with Choi Soon-sil, who offered "her personal opinion" on Park's speeches before the presidential election in 2012.

Choi does not hold any public office.

In a televised presidential apology, Park said Choi looked at "some documents" for a certain period of time after Park took office, but didn't specify what they were.

Local media and opposition parties accused Choi of abusing her relationship with Park to force big local conglomerates to donate millions of dollars to two foundations they claim she had set up.

The South Korean prosecutor's office on Thursday established a "special investigation unit" to probe the cases.

Under South Korea's constitution, Park - as sitting president - is immune from criminal prosecution except for insurrection or treason.

Lee Kyung-jae, a lawyer for Choi, said his client returned to Seoul on Sunday to answer questions from prosecutors and "testify according to the facts."

The prosecutor's office promised a quick and thorough investigation, according CNN affiliate YTN.

The incident has hit Park's approval ratings. Her weekly approval rate plunged to a record low of 21.1% Thursday, according to a local pollster Real Meter.

Park, whose presidency ends in early 2018, had approval ratings between 30% to 50% during her first three years in office. This year, however, has been a bad year for the president.

A combination of a weak economy, inadequate public communications and poor administration of state affairs, according to multiple poll results, have resulted in slipping approval scores.

Park, South Korea's first female president, is the daughter of Park Chung-hee, South Korea's leader from 1961 to 1979, who was assassinated by his own intelligence chief. The late Park is hailed by some as the mastermind behind the country's current prosperity but criticized by others as a dictator who violated human rights by crushing dissenters.