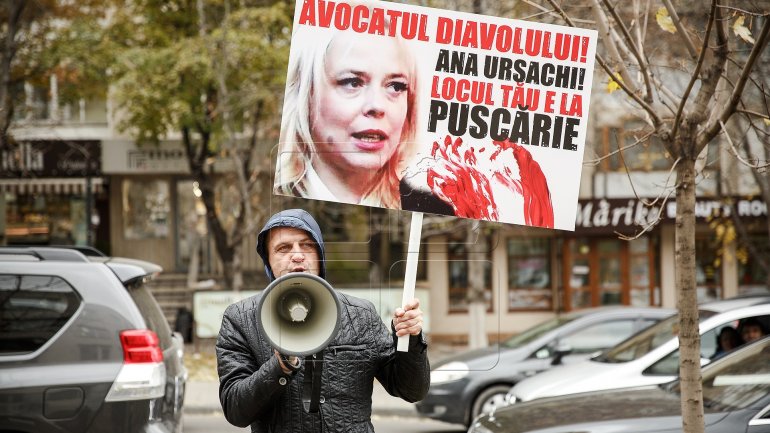 Protest at General Prosecutor's Office. Many people asked for Ana Ursachi, named as devil's lawyer, to be punished for the crimes she did.

The protesters claim that the place for Ana Ursachi is in jail.

It is not the first time when people are showing their displeasure towards the lawyer Ana Ursachi. Recently, some people put posters on the door of the building where Ana Ursachi lives containing the messages "Here lives the murderer Ana Ursachi" and "Go to jail".

Ana Ursachi is penally investigated for murder and might be put on international search is she will not go to the General Prosecutor's Office by Tuesday, November 1st, 2016. On 27 October 2016, the prosecutors' summoning was sent to Ana Ursachi, which was supposed to tell her about the opening of a penal case and that she has the status of accused. The policemen could not find Ana Ursachi, in order to give her the summoning. On Friday, 28 October 2016, the second summoning was sent to her.

At the same time, the prosecutor Dumitru Stefarta confirmed the fact that the lawyer left the country, with reference to the data from Border Police. She supposedly left for Bucharest, from where she flew to Frankfurt where, according to media, she met the fugitive Victor Topa.

Afterwards, she also allegedly met Renato Usatai in Moscow. Then Ursachi went to Kiev, where she had a press conference in the defense of the number one raider in CIS, Veaceslav Platon. In the last period of time, Ursachi defended in the court Andrei Nastase, Renato Usatai, Veaceslav Platon, Alexandr Petkov, and Grigori Petrenco.