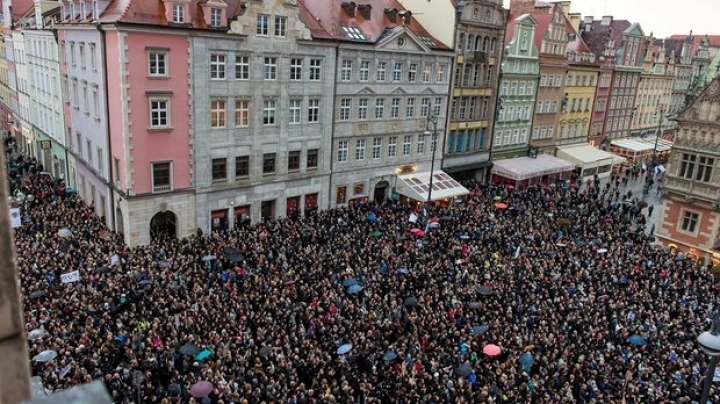 A controversial proposal to ban abortion in Poland appears to have collapsed after senior politicians from the ruling Law and Justice party (PiS) backed away from it after a parliamentary committee urged MPs to vote it down following mass protests, reports The Guardian.

The justice and human rights committee, which reviews proposed legislation, recommended that parliament reject the bill following a wave of protests earlier in the week that appear to have caught the rightwing government off guard.

In a humiliating climbdown, PiS members who had referred the legislation to the committee less than two weeks ago threw it out.

The Liberal MP and former prime minister Ewa Kopacz told reporters the PiS had “backtracked because it was scared by all the women who hit the streets in protest”.

Tens of thousands of people boycotted work and classes on Monday to protest against the proposals, which if enacted would impose a blanket ban on abortion, including in instances of pregnancy as a result of rape or incest.

Jarosław Gowin, the minister of science and higher education, said on Wednesday that the protests had “caused us to think and taught us humility”.

“The protest was bigger than anyone expected. People were astonished,” said Agnieszka Graff, a commentator and activist. “Warsaw was swarming with women in black. It was amazing to feel the energy and the anger, the emotional intensity was incredible.”

The so-called “black protests” appear to have shifted public opinion on the issue, with recent polls suggesting not only near-overwhelming opposition to the proposed ban, but increasing support for the liberalisation of existing laws.

Polls also suggest that support for the government has dropping to its lowest levels since elections last year.

Parliament will now have the opportunity to throw out the legislation altogether, or to refer it back to committee.