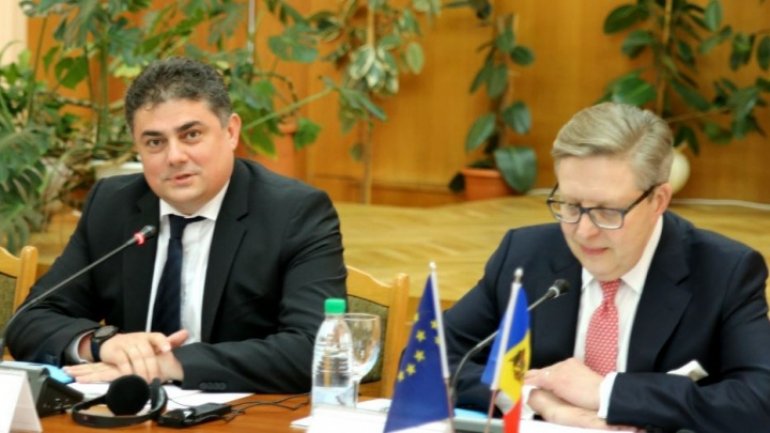 This is what vice prime-minister, minister of Economy Octavian Calmîc declared within the closing of the Twinning project conference.

Vice prime-minister Octavian Calmîc states that, due to the results obtained in this project, Moldova has obtained a very strong basis for the international recognition of the metrology and standardization sectors, as well as new opportunities for the improvement of the competitiveness of Moldovan products internationally and for a better promotion of national exports.

Octavian Calmîc specified that "Due to this project, the institutions from the quality infrastructure, with the support of EU experts from Germany and Romania, realized concrete deeds oriented to the increase of the competence and performance of the staff involved in the national standardization process, as well as in the metrology activities, largely benefiting of knowledge transfer regarding the application of the best European and international practices ".

According to the minister of Economy, the project was very consistent and valuable as content, representing a substantial contribution for the improvement of the processes from the sphere of infrastructure of quality from Moldova, with long-term beneficial effects.

The vice prime-minister Octavian Calmîc mentioned: "The project offered technical assistance and the transfer of knowledge through a financial contribution in sum of 1,1 million euro, materialized through technical consultancy by European experts, workshops, seminars and experience exchange".
"Due to the implementation of European standards we eliminated a series of problems for the producers from Moldova on their way to the export of goods on the european market", emphasized the chief of the EU Delegation in Moldova, Pirkka Tapiola.

EU will support our country in the given sphere also by other projects, because the aim of the European Union is to insure, first of all, the local market with qualitative products, also mentioned the european official.

At her turn, Ulrike Maria Knotz, the ambassador of Germany in our country, mentioned that as the result of the project’s implementation, due to the increase of the quality of Moldovan products, increased the exports of Moldova on the EU market, what significantly contributes to the development of national economy.

Daniel Ioniță, the ambassador of Romania in Moldova, emphasized that due to this project’s realization, the Moldovan goods became more competitive not solely on the european market, but also on other markets of the world.

The Romanian diplomat emphasized that "Romania is a loyal supporter of the european route of Moldova and will grant to the Government all the support in the realization of the objectives assumed in this process, including by the active participation to the implementation of other projects".

Petros Sourmelis, chief of Department, DG Trade stated that that by the implementation of this project, Moldova succeeded to realize another important objective in the process of transposition into practice of the stipulations of the Free Exchange Area Agreement and Effective Trade.

According to Lidia Jitari, chief of the general Direction quality infrastructure and market surveillance from within the Ministry of Economy, in the process of realization of the project there were modified 4 laws from the sphere of quality infrastructure, created/re-established 21 technical standardization committees for diverse spheres of national economy, there were organized 100 workshops, seminars, instructions and experience exchange, at which participated about 1.000 persons, representatives of public institutions and of other parts interested from the sphere.

For the international recognition of the measures effectuated in Moldova, the National Metrology Institute participated to 6 inter laboratory comparisons, as well as there were elaborated 15 proceedings of calibration and numerous normative documents from the sphere of metrology.