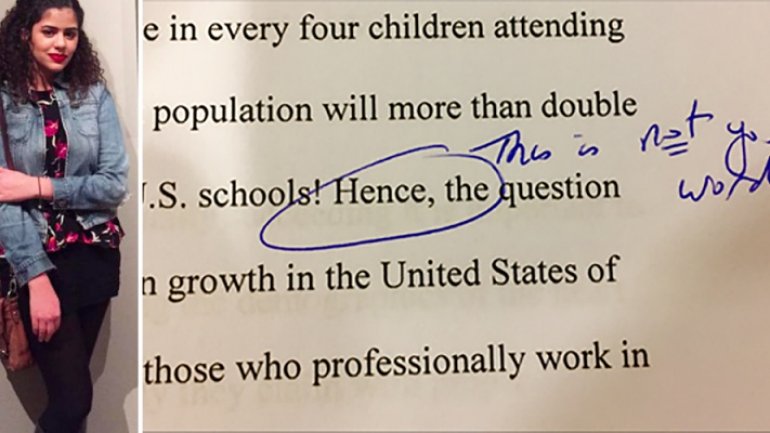 Tiffany Martínez is a first-generation college student majoring in sociology at Suffolk University in Boston. She is a McNair Fellow, a Dean’s List recipient, and has presented at national conferences all over the U.S..

According to yahoo.com, on the morning of Oct. 27, her professor handed her back a paper she’d written wrote and announced, in front of the entire class, "This is not your language." At the top of the paper were the words, “Please go back and indicate where you cut and paste,” presumably meaning the professor believed Martínez had plagiarized passages. On the second page, the word "hence" was circled, next to the note, "This is not your word." The word "not" was underlined twice.

Martinez responded by writing a blog post critiquing the racial biases apparent in such a judgment, and her disappointment at living in "a society where people like me are not set up to succeed".

Martinez’s paper did not have a grade, only the words, "needs work." Hence, Martínez ended her blog post with quite the literary mic drop: "Academia needs work."

BuzzFeed reports that Martínez "has not spoken with the professor since the incident, but has brought it to the attention of the chair of Suffolk University’s sociology department, who has launched an investigation." In particular, the department’s head read over her paper, Martínez added, and "had nothing but good things to say."