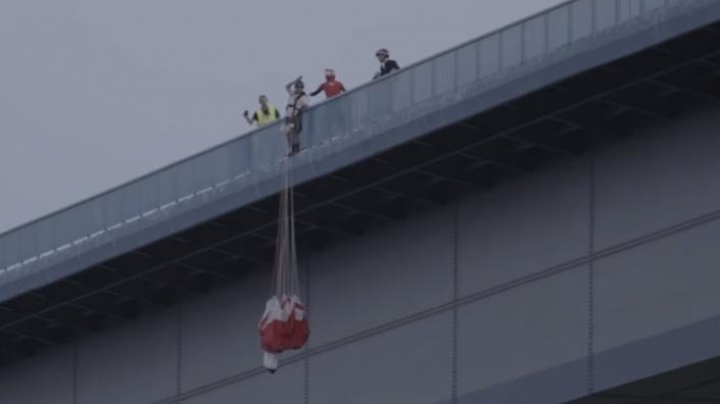 A novice base jumper has narrowly avoided leaping to his death after an eagle-eyed instructor spotted he had failed to fasten his harness correctly, Indepedent informs.

Professional jumper Chris McDougall, from Australia, had been teaching students on a 110m high bridge in Croatia when a jumper from outside the group climbed over the railings without putting on his leg straps.

Mr McDougall noticed the mistake and launched a expletive-filled warning at the man who was just moments from jumping.

In a video of the incident uploaded to YouTube on Friday, Mr McDougall can be heard shouting "Stop! Stop! Stop!" after the man dropped his parachute over the side of the bridge.

"This random jumper came rushing out [...] and had clearly no idea what he was doing," said Mr McDougall following the incident.

The incident did not stop the thrill-seeker from base jumping however, and he attempted the jump again after he had fitted his equipment correctly and landed safely.

BASE jumping - which stands for buildings, antennas, spans and earth, from which jumps are performed - is one of the world's most dangerous sports. Unlike a parachute jump from a plane, BASE jumps are done from fixed objects at lower altitudes.