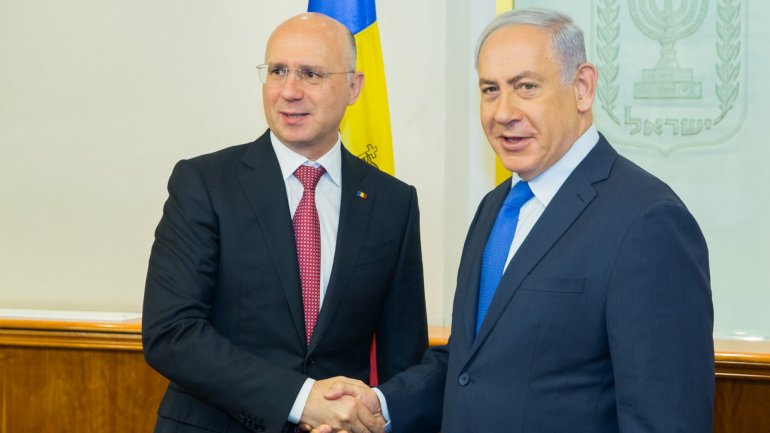 Prime Minister Pavel Filip and his counterpart Benjamin Netanyahu have discussed of bilateral relation between Moldova and Israel and perspective to further develop them.

"The bilateral dialogue is very good, but we have a bigger invaluable potential. Here, it is important to soon organize a mixed Committee session between the two Governments on the topic of economical and commercial collaboration" Pavel Filip said.

The idea was supported by Prime Minister Benjamin Netanyahu, who claimed that an economy develops only based on friendly relations. Here, the liberalization of airspace and the operation of low cost flights between the Republic of Moldova and the State of Israel has a special significance. This fact will allow better commercial trade and influx of tourists from both countries, agreed both Filip and Netanyahu

Prime Minister Pavel Filip invited Israelis businessmen to invest in Moldova and participate in the privatization program, launched by authorities.

"We wish for Republic of Moldova to have investments from Israel. We have done much for the country to become more attractive for investors, such as the reform reducing pressure upon business environment" Pavel Filip mentioned.

Moldova's Prime Minister has accentuated the importance of signing an Agreement of social protection for citizens of Moldova that work in Israel. At the moment, such an agreement exists in the construction field, but our country wishes to extend it in other domains as well.

In his turn, Israel's Prime Minister, Benjamin Netanyahu supported the partnership developments between the two countries and joint realization of projects of common interest.

Prime Ministers Pavel Filip and Benjamin Netanyahu have also agreed to promote direct contact and political dialogue on all level, in particularly, between the Governments and Parliaments of the two countries. In this context, Pavel Filip has invited his counterpart to visit Republic of Moldova.

The two parties have also expressed their interest in the consolidation of cultural and human ties, through exchange of experience among educational institution, making diaspora more active and stimulating tourism between the two countries.

PUBLIKA reminds that a delegation, led by Prime Minister Pavel Filip is currently on an official visit to Israel.

The official has already met with Vice President of Knesset, Tali Ploskov and Minister of Immigrant Absorption of Israel, Sofa Landver.

At the same time, Chisinau's delegation will celebrate Moldova's Culture Day in Israel and will meet with Jews that came from Moldova, as well as our representatives  who live abroad.

The officials will take a tour of sacred places around Israel. The official visit will end on Friday.