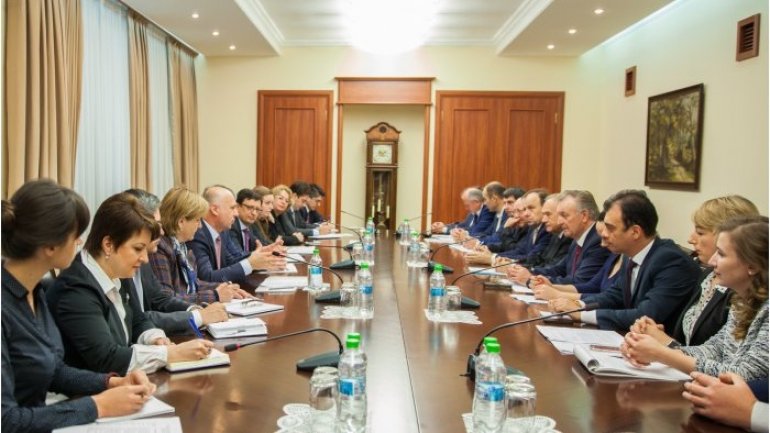 An initiative to work out a new Tax Code, ensuring transparency of the acts regulating the economic activity, as well as government’s priorities in terms of backing the business environment were the main subjects tackled at a today’s meeting between Prime Minister Pavel Filip and representatives of the National Employers’ Confederation (CNPM), Moldpres reports.

Prime Minister Pavel Filip referred to measures promoted by the cabinet to ensure the best conditions for the business environment. Among them, there is the reform of state controls, reducing the number of permissive acts, unifying reports and eliminating the service records, removing compulsoriness of the stamp, as well as replacing the authorization of work by the trade notification.

“I want positive changes in what we call the business environment. I come from the business community. Therefore, you may see in me a backer and promoter of the native business’ interests,” the PM said.

At the same time, Pavel Filip referred to the work of the Economic Council under the Prime Minister, which has the role of identifying systemic problems in the entrepreneurial activity and generate concrete solutions to improve the legal framework.

For his part, CNMP head Leonid Cerescu stressed the option of the National Employers’ Confederation for continuing the constructive dialogue with the government, through the light of the present cooperation memorandum. According to Cerescu, changes have taken place in terms of improvement of the business environment; yet, there are still important steps to be made for the economic agents to fully feel the changes.

At the same time, Leonid Cerescu reiterated the importance of involving the business environment in the process of working out and implementing the documents of policies which regulate the economic activity.

In the context, Prime Minister Pavel Filip said that he was an ardent supporter of implementing the principle of “single desk” in the business-state relation. “The economic agent must submit the needed information to the state institutions only one time. As for the rest, the latter should ensure the inter-operability of the databases system. Even if there is reticence in the implementation of this system, we are determined to go up to the end,” Pavel Filip said.

The prime minister also confirmed the government’s openness to ensure a constructive dialogue with the employers and business environment. “The things are moving forward where there is mutual advantage, problems can be solved by common agreement, where everybody are getting involved. I want a sound partnership between the government and the business environment,” the PM added.
AFLĂ imediat Știrile Publika.MD. Intră pe Telegram