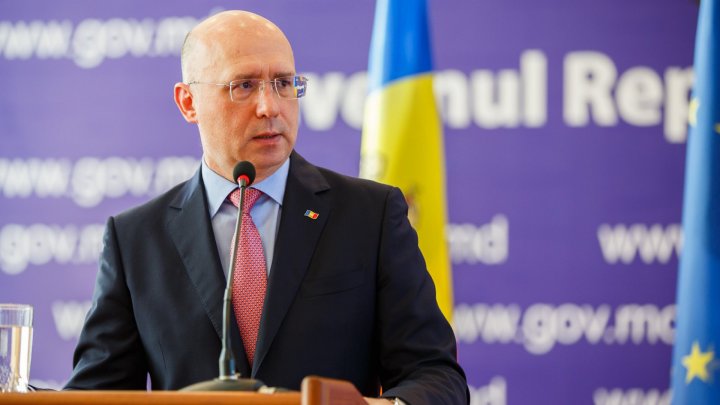 The results Filip's Government has managed to attains over the past two years have proved wrong to the attacks and criticism of the opposition, who blocks the Executives activity and is creating chaos in Moldova. The country's stability, the recovery of the banking system and economic growth of nearly 4%, are only a few of the successes Cabinet Ministers have managed to achieve. 2018 will be a year when citizens will feel the positive effects of the reforms implemented by Filip's Government. Those are a few of the statements made by Prime Minister Pavel Filip during the press conference organized to commemorate two years since his appointment.

Within his speech, Pavel Filip has empathized that despite being chosen during a crisis, the Executive managed to bring back foreign finances and stabilize the economy. Prime Minister has mentioned that economic development represents the Government's main aim. Therefore, an economic growth of neatly 4% was registered, the state budget's earnings having increased, measures were taken to improve the business environment and the recovery of the banking sector.

This economic growth brought positive adjustments to the social agenda, improving the standard of living in Republic of Moldova, by increasing the average salary, indexing pensions and reforming its system.

The topic of health remains one of the main concerns the Government has, various reforms being initiated for public health surveillance, disability determination, reconstruction of hospitals.

Modernizing education, through qualitative training of teachers, transparency in the process of closing schools, professional certification - are other objectives the Government of Pavel Filip aims for.

During the press conference, Prime Minister Pavel Filip has also accentuated the Government's priorities for 2018, namely:
-Justice reform: The reforms will connote the evaluation of all judge's integrity, reforming the justice system and finalize the reformation of the judicial framework, consolidating methods to make judges more responsible, strengthening the independence of the justice system and making it more efficient and transparent, by reforming the system of preventive measure of judicial control, reforming advocacy and Constitutional Court;
-Modernizing education: investing in all stages of education, starting from infant daycares, kindergartens, school, university and research;
-Developing the road and energy infrastructure: investing in national and local roads; allocating funds for energy security;
-Health care reform: finishing the reform for public health surveillance, by strengthening the new National Public Health Agency, reforming the disability determination system, finalization of the hospitals reconstruction concept;
-Solving the local and national waste issue.
At the end of his speech, Pavel Filip expressed his gratitude to all those who support and trust the Government he leads and assures them that, in 2018, the Executive will stay clear of the electoral campaign and will continue working to produce results.
AFLĂ imediat Știrile Publika.MD. Intră pe Telegram