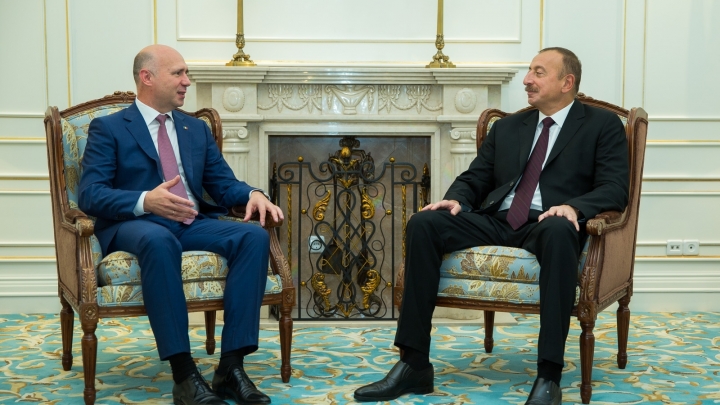 Prime Minister Pavel Filip has met President of Azerbaijan Ilham Aliyev, on the sidelines of a meeting of the Council of Heads of State from the Commonwealth of Independent States (CIS). The discussion was focused on the importance to maintain and develop an efficient Moldovan-Azeri partnership, based on mutual respect, both at the bilateral level and within international organizations.

Prime Minister Pavel Filip stressed the importance to create the needed conditions and infrastructure to give an impetus to the bilateral trade exchanges, as well as to turn to good account possibilities provided by the CIS Free Trade Zone and the trade area Moldova – European Union. In the context, the prime minister reiterated Moldova’s openness for the resumption, in a short time, of the work of the joint inter-governmental commission for commercial and economic cooperation.

At the same time, Filip referred to reforms underway nationwide to create a friendly and attractive business environment for foreign investors, and invited business people from Azerbaijan to open enterprises in Moldova.

President of Azerbaijan Ilham Aliyev appreciated the friendly and constant political dialogue between two states and spoke out for boosting the interaction between state structures and the business communities from both countries, in order to fully use the trade and economic potential.

The officials also exchanged opinions on the importance to settle territorial conflicts by peaceful means, according to the norms and principles of the international law, by observing the states’ sovereignty and territorial integrity, with the involvement of international mechanisms, including within the Organisation for Security and Cooperation in Europe.