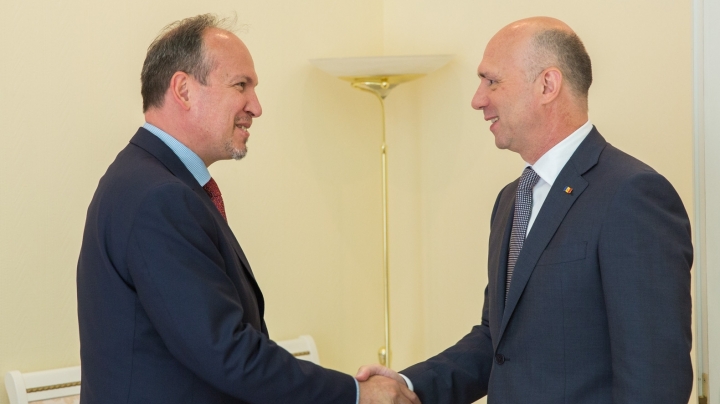 The prime minister Pavel Filip met the new ambassador of Romania in Chisinau, Daniel Ionita. The officials have discussed the Moldo-Romanian cooperation, the level of implementation of joint projects, cooperation on international level, with an accent on the relations of Moldova with European Union.

The prime minister welcomed the Romanian diplomat in Moldova, mentioning that the Romanian support given to Moldova is very important.

Daniel Ionita said that Moldova is a strategic priority for Romanian authorities. At the same time, the official mentioned that he starts his mandate with a lot of optimism and with the wish to contribute in a decisive manner to the closeness between Moldova and European Union.

The official discussed regarding the reforms launched by the Government, the level of implementation of the commitments towards the development partners, the negotiation of a country Agreement with IMF, and the actions done for the improvement of the level of living of citizens.

Daniel Ionita has stressed the fact that Romania will continue to give support to Moldova in kindergartens renovation, SMURD mission accomplishment, insurance of energetic security, including in the project of the construction of gas pipe Chisinau-Ungheni, and in other strategic sectors.

At the same time, the ambassador mentioned that during his mandate he wants a consolidation and diversification of Moldo-Romanian relations of cooperation.