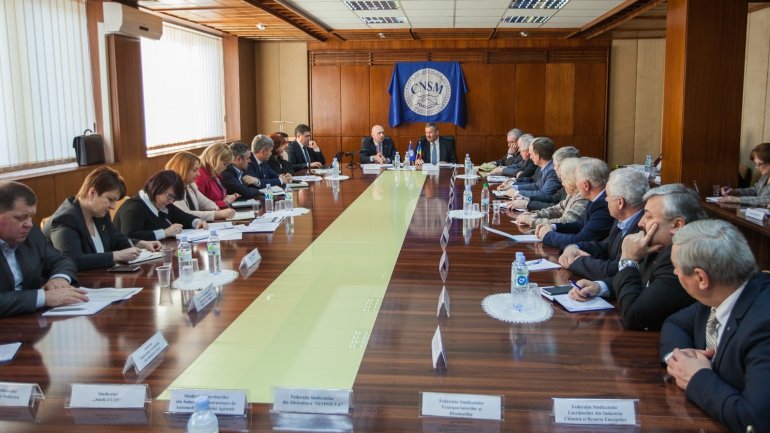 Prime Minister Pavel Filip met today representatives of the National Confederation of Trade Unions from Moldova. The dialogue was referred to the actions of Executive to improve citizens’ living conditions and ensuring public sector workers with decent wages, the government’s communication and protocol department has reported.

During the talks, the prime minister appreciated the efficient communication between authorities and branch trade unions over the past year, showing that the government still pleaded for an honest and sincere dialogue to resolve existing problems. Similarly, Pavel Filip made a review of the results of the cabinet of ministers, stressing that although at the start of external financing was blocked, trust in state institutions was low and were forecasts for state entering default, there were made maximum efforts to stabilize the situation.

"We managed to cope with the crisis and stabilize the situation. We have an agreement with the International Monetary Fund (IMF), which unlocks and other external funding, including from the European Union. Now we focus on attracting more investments, which will allow us to create well-paid jobs, to accumulate more contributions to the state and finally to increase social investments," said Pavel Filip.

The prime minister referred to the claims to authorities submitted by the Trade Unions Federation of Education and Science, noting that five of the six requests were practically solved and the government intended to approve soon, several decisions in that regard. At the same time, Pavel Filip announced that he ordered the creation of the Supervision Group on the Reform of the public sector wage system, where would be included the trade unions representatives. This group is to make a comprehensive analysis of the system, to see which are internal reserves and come up with concrete proposals to improve the functioning of payroll employees in all public sectors, including education, health and culture.

"The solutions are not identified in the protest, they are identified in dialoguing. I suggest you to get involved actively in the process of finding opportunities for increased wages for employees in the system of education. If we do not remove barricades separating us, we will not find solutions. We are in constant dialogue and together we will find solutions," concluded the prime minister.

The dialogue with trade unions representatives was a dynamic one, being discussed several issues of common interest. The sides exchanged views on the fight with salaries in envelopes and shadow economy, enhancing of education system quality, implementing pension reform, but also the necessity of subsistence minimum raise.

Also today, Prime Minister Pavel Filip sent a letter to the leadership of the Trade Unions Federation of Education and Science on measures taken by the Government to resolve the submitted claims.