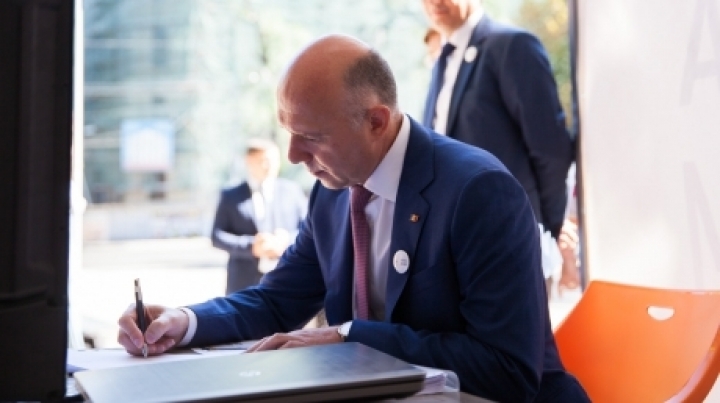 Pavel Filip welcomed the initiation of solidarity of society in supporting the European integration of our country, saying that the European Union is an important partner for Moldova, and accession to the European community requires quality public services, developed infrastructure and living conditions better for citizens.

At the same time, the prime minister repeated his appeal launched in early August, on strengthening the political forces and society as a whole to guarantee the continuity of the European vector of development of the country.

"I came to sign the petition considering that my example will be followed by other citizens of Moldova, who will join this call. I strongly believe that Moldova will developed, including economic, just keeping its European path" ,  said Cabinet chief, Pavel Filip.

Meanwhile, the prime minister said that to build a stable and prosperous Moldova, citizens need a common idea to unite and ensure the country's development.

"There must be an idea around which the whole society will be mobilized so that citizens, along with the Government and Parliament, will pull in the same direction. For Moldova, this direction is the European integration" , said Prime Minister Pavel Filip.

The "Join Now" campaign is supported by several public associations and aims to inform people about the benefits of European integration, results achieved in the implementation of the Association Agreement, and the opportunities created for each citizen.

During the campaign, 10 imformational points were in different regions of Moldova.