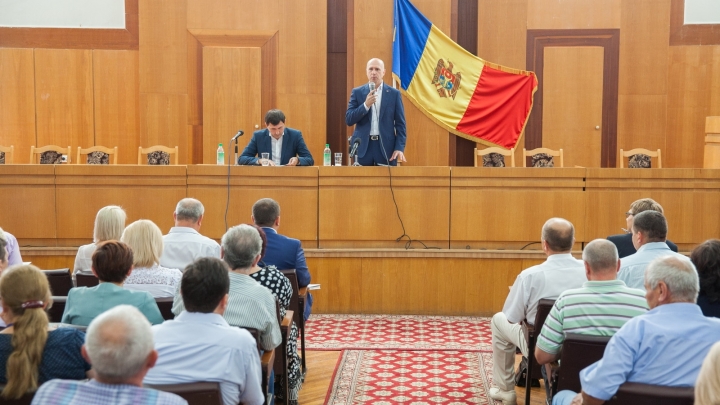 Prime minister Pavel Filip had a meeting today with local public authorities from Anenii Noi, during which were discussed the reforms started in the last 6 months, the steps done for the unblocking the external finances, and the actual problems and future priorities.

Regarding the reforms, the prime minister reminded the restructuration of bodies with control functions and the institution of moratorium in the state controls, the reduction of the number of permissive documents for economic agents, and other measures of supporting the entrepreneurship.

Especially, the chief of the Government discussed the launching of pension system. Pavel Filip specified that the concept meant for the transformation of pension system in an equitable and sustainable one, meant to ensure a good life to elder people, was signed.

At the same time, Pavel Filip said that the Government’s objective is to ensure the citizens with a good life, and the quality should correspond to European standards. In context, the prime minister has informed that he launched today a call of consolidation of political forces and the whole society in order to fulfill the country’s European project.

The discussion was an interactive one, and the questions addressed to the prime minister were linked to the activity of first and secondary degree education institutions from the region, the stringent need of rehabilitation of broken roads, and the need of improvement measures of the ecologic situation in some localities.

Also, local public authorities have requested the Government’s help in the implementation of European Union policies and directives at local level and in the development of capacities of accessing the international funds.

The prime minister said that he will ask from the people responsible in the Government a detailed analysis on each problem, in order to identify the best solutions for each of them.