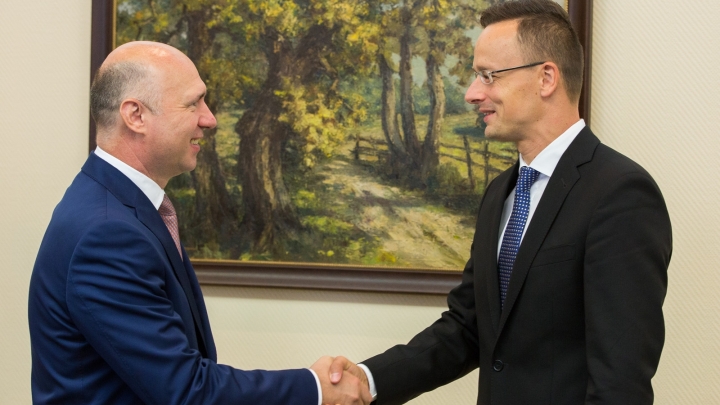 The evolution of the Moldo-Hungarian relations in various fields and the possibility of their expansion were discussed today during the meeting of the prime minister Pavel Filip with the Hungarian minister of Foreign Affairs and Trade, Peter Szijjarto. The prime minister welcomed the visit of the Hungarian official in Chisinau, appreciating the increasing tendency of the development of bilateral reports.

Pavel Filip thanked the Hungarian part for the constant support given to the European way of Moldova, mentioning that the implementation of the Association Agreement is the main priority of the Government. The chief of the Ministers Cabinet has specified that our country is in process of negotiating a new association agenda and has to draft a new National Plan of Implementing the Association Agreement (2017-2019).

The as main concerns of the Government, the prime minister mentioned returning the trust of citizens and development partners in state institutions, the insurance of financial stability, the renewal of relations with external partners, consequent actions for the improvement of the business environment, so that Moldova will become an attractive destination for investors. In this context, Pavel Filip invited the Hungarian businessmen to actively participate to the privatization process of Moldovan enterprises, a new stage which will be launched next week. Also, the prime minister welcomed the initiative to organize in Chisinau, in November 2016, a Moldo-Hungarian Business Forum, which will facilitate the establishment of direct contact between the businessmen from the two countries and the initiation of some mutually beneficial economic and investment projects.

In his turn, the Hungarian minister of Foreign Affairs and Trade, Peter Szijjarto, has congratulated the Government with the fulfillment of the actions included in the Draft paper regarding the agenda of priority reforms and reconfirmed the availability of Hungary to continuously support Moldova in its efforts of European integration.

In another train of thoughts, the Hungarian official stressed out the importance of speeding up the trade relations between the two countries, mentioning in this regard the implementation of some projects mutually beneficial in the fields of agriculture, border management, public order and emergency situations. The Hungarian part expressed its interest in financing investment projects in Moldova and the availability to facilitate the bilateral commercial exchanges.

Hungary is one of the main partner countries of Moldova, the volume of bilateral trade for 2015 reaching 73.6 million dollars.