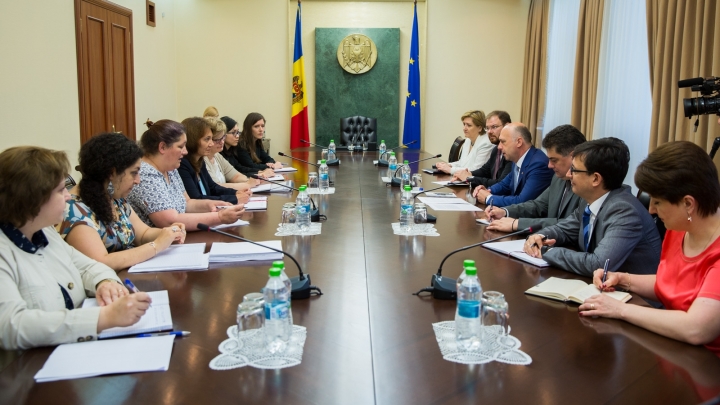 Prime Minister Pavel Filip today had a meeting with the team of experts of the International Monetary Fund (IMF), led by Ivanna Vladkova-Hollar, on a 5-15 July visit to Chisinau.

At the meeting, the prime minister expressed happiness about the re-meeting with the IMF team in Chisinau and appreciated efforts made to this end. “Moldova needs stability to implement the reforms underway. We want to negotiate an Agreement with IMF, in order to ensure the country’s sustainable development,” Pavel Filip said.

The prime minister informed that, due to a close cooperation between the government and parliament, the authorities had managed to already carry out 68 per cent of the actions included in the Roadmap on priority reforms. Among the main trends, the prime minister highlighted the justice reform and the reform of the financial and banking sector, anticorruption measures, improving the business environment, public administration reform, collaboration with the civil society.

For her part, Ivanna Vladkova-Hollar appreciated the cabinet’s efforts to advance on the financial and banking sector’s dimension, which made possible the arriving of a new IMF mission to Chisinau. The head of the IMF experts’ team specified that the present mission would focus preponderantly on the financial sector, after which emphasis would be put on wider structural and fiscal reforms, to promote economic growth.

At the same time, the prime minister Pavel Filip said that the goals set forth by IMF met the government’s ones. “It is important that we implement the reforms in the key sectors, in order to achieve the principal objective of the government – improving the residents’ living standards. To create new jobs and have decent salaries, we need investments, and investments come where there is no corruption, where there is an attractive business environment and a stable financial and banking sector,” Pavel Filip stressed.

The prime minister confirmed that the government had the necessary will, determination and potential to implement the reforms; yet, it needs the support of the development partners as well. In this respect, the negotiation of a new Memorandum on economic and financial policies between the Moldovan government and the International Monetary Fund is very important, Filip added.