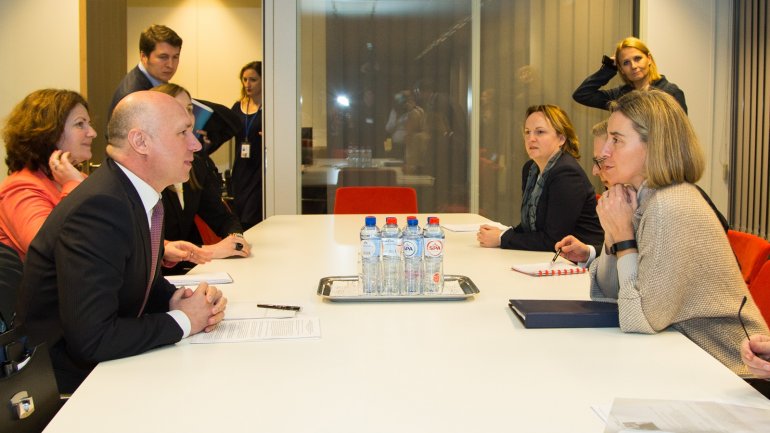 Prime Minister Pavel Filip discussed in Brussels with Federica Mogherini, EU High Representative for Foreign Affairs and Security Policy, Vice-President of the European Commission. The dialogue was focused on the reforms promoted by the Government in various fields, and the continuation of implementation of the Moldova-EU Association Agreement.

"The roadmap on priority reforms helped us a lot in getting an agreement with the IMF, which is a certificate of trust for us. I have all confidence that we can resume the foreign financing. The Government gives importance to the development of a new Agenda EU Association which will become part of the new National Plan for the implementation of the Association Agreement for the years 2017-2019" said Pavel Filip.

The Premier also stressed the fact that the government is committed to continue implementing reforms that will change the lives of citizens.

"There are reforms designed by us, very important, including pension reform, public administration reform, hospital and primary health care reform. We need the political support of the EU, and financial support for their implementation," said Pavel Filip.

In her turn, Federica Mogherini praised the actions taken by the government to relaunch the reform process and expressed the EU's readiness to support the implementation of the reform agenda aimed at improving the quality of life of citizens of the Republic of Moldova. In this context, the European official stressed the importance of a constructive approach between the Government and the President for the benefit of our citizens.

The officials also discussed the meeting of the Group of Friends of Moldova which will be held on 12 December 2016 and will be an opportunity to draw priorities of cooperation with the EU.

The prime minister Pavel Filip invited Federica Mogherini to visit Moldova at the beginning of 2017.