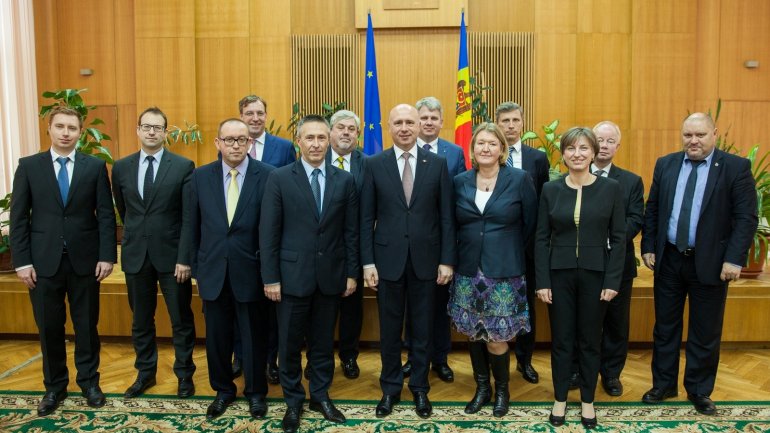 Prime Minister Pavel Filip had today a meeting with EU ambassadors for Eastern Partnership, who are in a working visit to Moldova. The prime minister said that this visit is an opportunity to review the actual situation in our country and expressed the Government's determination to continue implementing the Association Agreement.

"The presidential election cannot change the option of European integration. Moldova is a parliamentary state. Strategic decisions are taken by Parliament, and their implementation is the prerogative of the Government. There are constitutional guarantees in this respect but also a good post-electoral sense" pointed out Pavel Filip.

The Prime Minister expressed his confidence that the government will take a constructive cooperation with the President-elect.

At the same time, the prime minister gave assurances that the government will continue efforts to achieve the commitments undertaken under the Association Agreement, and reforms are imminent for the welfare of citizens.

"In this government you have a guardian of the European road. We intend to build a Moldova based on European values so that every citizen should understand that this is the correct path" the prime minister said.

The prime minister also referred to the program concluded with the IMF, which provides not only funding, but also represents a reform agenda.

"2015 was a year of crisis, 2016 of stabilization, and 2017 is the year of seriousness in the development and accelerated reforms", said Pavel Filip.

In their turn, EU Eastern Partnership Ambassadors congratulated the Government for the registered successes, including the realization of the Roadmap and the obtainment of a program with the IMF, which denotes a high volume of work done.

In other words, European officials said that the presidential elections were conducted according to the standards and, despite some shortcomings, is a democratic breakthrough.

At the same time, European ambassadors have expressed willingness to support Moldova in promoting reforms that will change the lives of citizens.

In context, the parties spoke about the need to streamline cooperation on dimension of the Eastern Partnership, noting the importance of reinvigorating this regional structure.