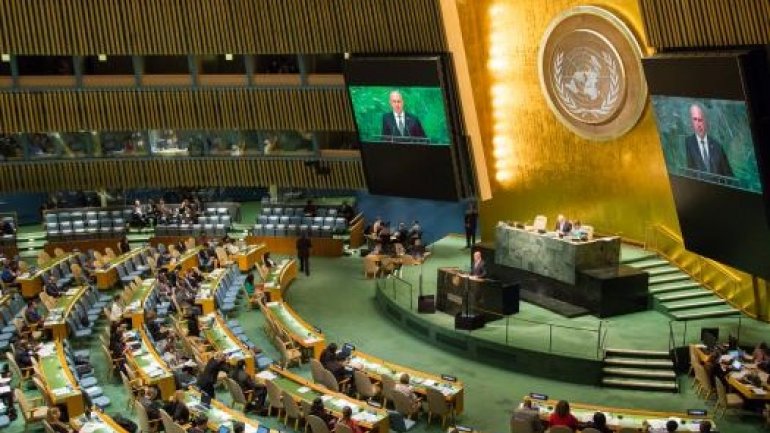 Prime Minister Pavel Filip delivered a speech at the UN meeting in the general debates of the 72nd session of the United Nations General Assembly.

Below you can see the entire Prime Minister's message:

"I would like to begin by addressing to you, Mr President, the warmest congratulations on your election as President of the 72nd session of the General Assembly, wishing you success in fulfilling your mandate.

We also express our gratitude to the predecessor, His Excellency, Peter Thomson, for his dedication and professionalism in managing the proceedings of the previous session.

Likewise, I would like to address a few supporting and encouraging words to Secretary-General of the United Nations, His Excellency, António Guterres, I'm sure that with your competent leadership and the joint efforts of member states, we will manage to redefine the UN's role through its adjustment in the challenging modern world.

It is obvious that we, reunited within this universal vocation, are deeply concerned about the challenges facing the international community.

Armed conflicts in the Middle East, long-standing conflicts, terrorism and violent extremism, poverty-induced problems are just some of the phenomena that undermine peace and sustainable development.

We are deeply concerned about the excessive accumulation of weapons and the development of nuclear weapons programs. An international climate marked by threats with the use of force, including nuclear weapons, emphasizes the feeling of insecurity and lack of trust.

The speeches of previous distinguished speakers show that we all perceive almost the same global challenges we have to face. Today, more than ever, a common commitment of the UN Member States is needed to meet these challenges.

In this context, I would like to reiterate our full support to Secretary General Gutteres for his reform agenda aimed at increasing the focus on conflict prevention; repositioning development at the center of the organization's work, and reforming the UN's internal management to effectively respond to new and old challenges.

Following the signing of the Association Agreement with the European Union in June 2014, the Republic of Moldova has pledged itself in a process of structural reforms in order to build a modern society, following the European model of development.

Our main efforts are focused on strengthening the rule of law, developing a functioning market economy with a strong social dimension, ensuring human rights.

Strategic sectoral development priorities focus on particularly infrastructure modernization, rational resource management, development of green economy and renewable energy, application of modern technologies in agriculture. In this context, I will also mention the reform of public administration and services for the population, the provision of gender equality and the promotion of youth.

We have the political will to carry out these reforms, and we continue to rely on the support of our external development partners, especially the European Union and the UN.

The Republic of Moldova fully shares the view that the prevention and settlement of conflicts, especially of long-standing conflicts, are indispensable prerequisites for achieving the 2030 Sustainable Development Agenda.

Lack of progress in regulating long-lasting conflicts must trigger direct involvement from relevant UN bodies. We believe that no conflict must remain outside the UN's attention, regardless its appearance on the Security Council's agenda.

We welcome the fact that the General Assembly has included and maintained on its agenda a point entitled "Long-standing conflicts in the GUAM area and their implications for peace, security and international development."

Discussing this issue within the General Assembly does not undermine the existing negotiating format, and the experience of previous sessions unjustifiably leaves some concerns expressed by some states in this regard.

On the contrary, continued UN monitoring and proactive approaches to developments in the GUAM area may counter the attempts to modify the political frontiers of the states in the region through methods that have nothing to do with democracy and international law.

I use this occasion to express the profound re-engagement of the Republic of Moldova with the perpetuation of the armed conflict in the eastern regions of Ukraine, a conflict that threatens peace and security in our region. I reiterate, in this context, our full support for the sovereignty and territorial integrity of Ukraine.

The issue of the unregulated conflict in the eastern part of the Republic of Moldova, deepened by the illegal staying of foreign military forces on national territory, has been repeatedly addressed since the UN agenda since 1992.

We have pointed out that unlike other conflict situations in the former Soviet space, the Transnistrian conflict, being less complex, could be regulated more easily if all parties would manifest the necessary political will. In our case, there are no antagonisms of an ethnic or religious nature, and the population on the two banks of the Dniester River can coexist in peace and good understanding in a reintegrated Moldovan state.

Despite the efforts of the past 25 years with the involvement of international actors, we have not been able to regulate this political conflict. We will continue our efforts to identify a solution in the existing "5 + 2" negotiation format. For us it is extremely important that this solution be based on respect for the sovereignty and territorial integrity of the Republic of Moldova, with the granting of a special status to the Transnistrian region, as stipulated in the relevant OSCE documents.

We believe that the process of regulation could be facilitated by the transformation of the current "trilateral peacekeeping force" from the Transnistrian region, with a Russian Federation contingent in a multinational civilian mission with international mandate.

I would point out in this context that this trilateral withdrawal force, created on the basis of the Moldovan-Russian ceasefire agreement of 21 July 1992, has achieved its objectives many years ago. This obsolete mechanism has become a factor in preserving the Transnistrian conflict that has failed to ensure full demilitarization of the security zone and to remove obstacles to the free movement of persons, goods and services.

Contrary to expectations, the Russian Federation did not withdraw its military forces from the territory of the Republic of Moldova, in accordance with its international commitments, stipulated in the Moldovan-Russian ceasefire agreement of July 1992, the Moldovan-Russian agreement of October 1994 and, respectively, in the relevant OSCE documents, in particular, in the Political Declaration of the OSCE Summit in Istanbul in November 1999.

I specify that these military forces are distinct and should not be confused with the contingent of Russian soldiers participating in the "trilateral peacekeeping force" operating under an ad hoc arrangement.

The military exercises carried out in the Transnistrian region by the Russian troops in common with the forces of the Tiraspol secessionist regime, including the use of the military technique for the Nistru's forcing, are a real security challenge for the Republic of Moldova. These actions are in flagrant contradiction with the obligations to strictly adhere to the principle of neutrality with respect to the parties to the conflict, expressly stipulated in the Moldovan-Russian ceasefire agreement of 1992.

According to OSCE reports, the Russian troops' Operations Group contains more than 21,000 tonnes of ammunition and weapons.

The Government of the Republic of Moldova does not control or monitor these ammunition and weapons. The lack of transparency and access to such deposits does not allow the technical status of ammunition, especially outdated, to be assessed. For the same reason, transfers of arms and ammunition in the Transnistrian region or outside can not be monitored.

I underline in this context that the Republic of Moldova is not in a position to fulfill its international commitments, as a State party to various international conventions in the field of armaments control and disarmament, given that the ammunition and weapons, although stored in the national territory, do not is under "its jurisdiction or control".

Taking into account the commitments of the Russian Federation, the fundamental principles of international law, as well as the provisions of the Constitution of the Republic of Moldova regarding the status of permanent neutrality of the country and the non-admission of the deployment of other troops of national states on the national territory, we strongly reiterate the demand to withdraw completely unconditionally the so-called Russian Operational Group (GOTR), successor to the former Soviet Army 14, staying illegally on the territory of the Republic of Moldova.

In the same spirit, I would like to invoke the Declaration of the Parliament of the Republic of Moldova on the withdrawal of Russian military forces from the country on 21 July 2017, distributed to the UN member states as an official document of the General Assembly and the Security Council, call on the Russian Federation to resume and complete the process of withdrawal of its troops and ammunition from the territory of the Republic of Moldova.

Considering the competencies of the United Nations in the field of the maintenance of international peace and security and in accordance with the provisions of art. 11 of the UN Charter, the Republic of Moldova requests the inclusion of a point entitled "Withdrawal of Foreign Military Forces on the Territory of the Republic of Moldova" on the 72nd session of the General Assembly.

I appeal to all UN member states' delegations to support this legitimate request, which is a fundamental interest of the Republic of Moldova and fully complies with the principles of the UN Charter.

We hope that the inclusion of this point in the agenda of the General Assembly and its examination by the UN member states in a constructive and unpolished manner will constitute an important and necessary exercise of preventive diplomacy in relation to a country and region where peace and security is undermined by a lack of dialogue based on mutual respect and respect for fundamental principles of international law.

Thank you for your attention.