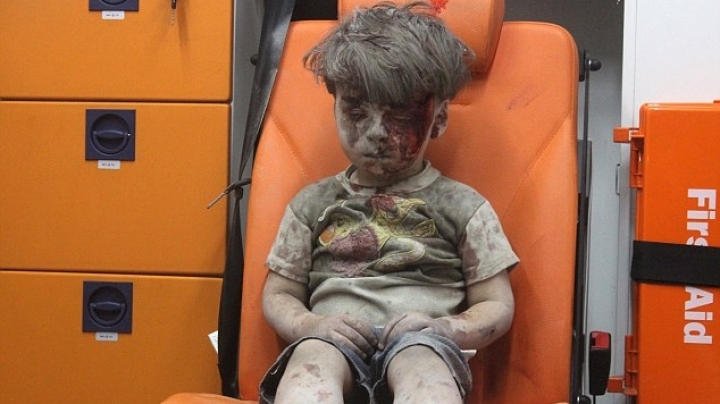 The horror and tragedy of the war in Syria has been captured in a single photograph of a wounded child.

A young boy, aged five, sits on a chair inside an ambulance after an airstrike in his hometown of Aleppo, the whereabouts of his parents unknown, reports Daily Mail.

Covered in dust from the rubble which was once his home, one side of Omran Daqneesh's face is drenched in blood, his expression dazed.

Footage shows him wiping his dusty forehead with his hand, before realising he is bleeding, and he rests his hands back in his lap.

The child is not crying, but waits quietly as his rescuers leave the ambulance to save the lives of four other children, before taking them all to the hospital.

He is wearing a T-shirt with the popular cartoon character CatDog on it, barely visible through the blood and dust.

Photos and video of the little lost boy quickly went viral after being taken on Wednesday night, people horrified at what is unfolding each day in full view of the world.

The ABC reported that Omran suffered head wounds when his home in the rebel-held eastern suburbs of Aleppo was hit in an airstrike.

Volunteers from Syria's Civil Defence group - known as the White Helmets - rescued the five-year-old along with three other children.

They were taken to the M10 hospital and Omran has since been discharged. Doctors do not know where the child's parents are.

Thousands of people have reacted to the images online since they were released on Wednesday night, expressing their heartbreak over the boy's plight.