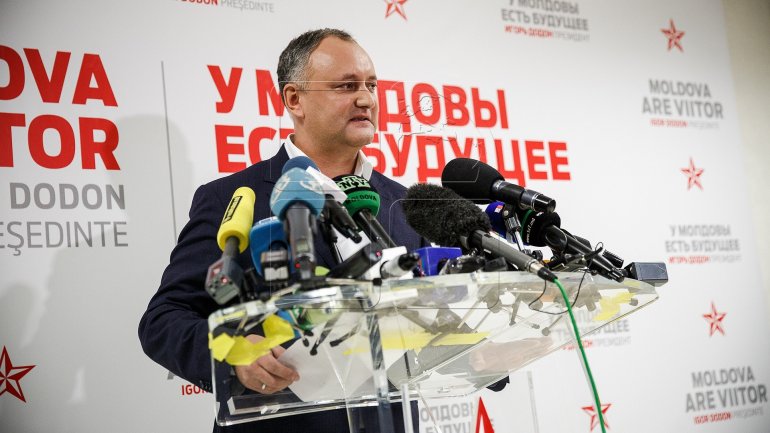 The Russian President Vladimir Putin has congratulated Igor Dodon on his victory in the presidential runoff on November 13th.

The management of the Russian President announced that the election outcome testifies to broad support by voters of Igor Dodon's policy to achieve social and economic stability in the country and build balanced foreign policy priorities.

The Russian leader said he hopes for constructive dialogue and active joint work to develop the Russian-Moldovan relations in line with provisions of the Friendship and Cooperation Treaty, signed 15 years ago.

The Kremlin leader wished him success in his responsible activity as head of state and invited him to visit Russia.

Romanian President considers it necessary for the new President to fulfill his mandate with wisdom, given the particular responsibility of the constitutional powers of the head of state.

However, President Klaus Iohannis considers that the only way to provide long-term prosperity for Moldova is to ensure internal political stability and responsible involvement of all political factors and institutional consolidation of the process of reforms aimed at state's modernization and support the European course for the benefit of Moldovan citizens.

The Romanian Government hopes that the fundamental institutions in Moldova will work together to ensure political stability of the country, continue the reform agenda and modernization process, designed to support the country's European course.

"The participation of Moldovan citizens at the presidential runoff  reflects, primarily, their willingness to help strengthen the country's democratic protection.

However, the presence of high responsibility in the vote strengthens the response to the expectations of all Moldovan citizens. Following the preliminary results and conclusions of the OSCE/ODIHR, European Parliament, Parliamentary Assembly of the OSCE and the Council of Europe, which were monitoring the election, the Romanian Government hopes that the fundamental institutions in Moldova will work together to ensure political stability of the country for continuing the reform agenda and modernization process, designed to support the European course of Moldova and have a positive impact on people's lives" , reads the press release.

According to him, the Romanian Government remains committed to continuing the special relationship with Moldova, "based on historical similarities and common roots while sharing the values of democracy and law''.

Ukrainian President, Petru Poroshenco said in a press conference that Igor Dodon is a good politician and that his actions will be pro-European.