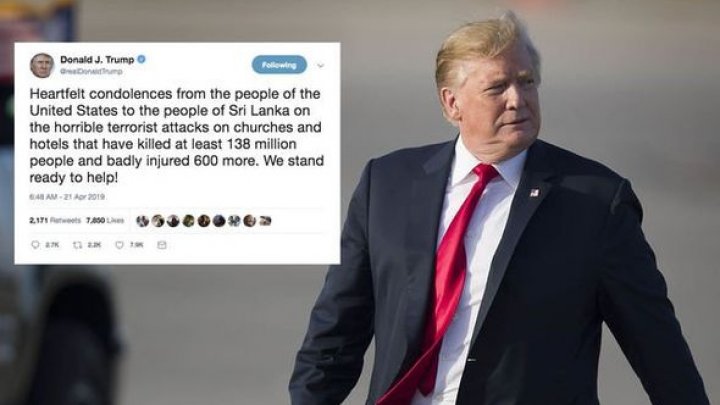 Donald Trump claimed on Sunday that the terrorist attacks in Sri Lanka killed 138 million people, a death toll nearly twice that of the Second World War.

The president botched the death toll as he offered his condolences for the horrific Easter Sunday attack, which has killed more than 200 people, writes Daily Mail.

'Heartfelt condolences from the people of the United States to the people of Sri Lanka on the horrible terrorist attacks on churches and hotels that have killed at least 138 million people and badly injured 600 more. We stand ready to help!' Trump wrote.

The tweet stayed up for 20 minutes before it was deleted and a new statement was posted.

'138 people have been killed in Sri Lanka, with more that 600 badly injured, in a terrorist attack on churches and hotels,' Trump wrote in the new tweet.

'The United States offers heartfelt condolences to the great people of Sri Lanka. We stand ready to help!'

Secretary of State Mike Pompeo revealed on Sunday that 'several' American citizens were killed in the bombings, which has been blamed on religious extremists.

Five British citizens, including two dual U.S.-U.K. nationals, were also killed in the bombings, according to Sri Lanka’s Foreign Ministry.

'These vile attacks are a stark reminder of why the United States remains resolved in our fight to defeat terrorism,' Pompeo said in a statement.

'Attacks on innocent people gathering in a place of worship or enjoying a holiday meal are affronts to the universal values and freedoms that we hold dear, and demonstrate yet again the brutal nature of radical terrorists whose sole aim is to threaten peace and security.'

Pompeo said the U.S. Embassy in Colombo, Sri Lanka's capital, is currently working to assist U.S. citizens and their families.

The White House also released an official statement condemning the attacks in the 'strongest terms.'

'Our heartfelt condolences go out to the families of the more than 200 killed and hundreds of others wounded,' it read.

'We stand with the Sri Lankan government and people as they bring to justice the perpetrators of these despicable and senseless acts.'

Eight explosions ripped through high-end hotels and churches as suspected suicide bombers blew themselves up on Sunday.

Seven people have been arrested in connection with the attacks.