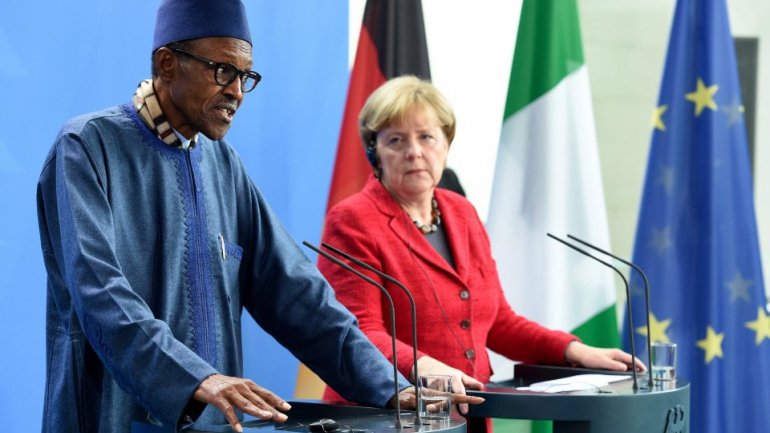 Nigeria’s president Muhammadu Buhari has reacted to his wife’s criticism of his leadership by saying she “belongs to my kitchen and my living room, and the other room,” at a press conference in Berlin, reports The Guardian.

Aisha Buhari told the BBC in an interview this week that she may not back her 73-year-old husband at the next election in Africa’s most populous state if he fails to shake up his government.

The presidents remark’s drew a sharp glare and then a laugh from Angela Merkel, the German chancellor, who was standing next to him at the event in the German capital.

Buhari, a former military ruler who won an election last year after repeated attempts, said he had more political experience than his wife, “so I claim superior knowledge over her and the rest of the opposition because in the end I have succeeded”.

Nigeria’s first lady, whose grandfather was the country’s first defense minister, said in the interview that Buhari has not told her if he would contest the 2019 elections.

But “if things continue like this ... I will not go out and campaign again and ask any woman to vote like I did before. I will never do it again,” she said.

Buhari is divorced from his first wife, Safinatu, with whom he had five children. He married Aisha, 45, in 1989. They also have five children.

The first lady also suggested the government had been hijacked by a “few people” who had made key appointments and that, as a result, Buhari did not know most of the people holding top posts.

Buhari was voted into power in 2015 after promising to fight graft and Islamic extremism. Nigerians have largely praised his commitment to restoring order and accountability.

Earlier this week, government officials announced that 21 female students abducted by the Islamic militant Boko Haram group from their school in the small town of Chibok more than two years ago had been freed after protracted negotiations, and that they expected the 190 girls who remain in captivity to be released soon.

The news prompted widespread celebration and will provide a welcome boost to the increasingly beleaguered leader.

But his comments in Berlin threatened to overshadow the release of the girls, which has already prompted a wave of speculation over the terms of the deal which secured their freedom.

The Nigerian government has denied reports that it paid millions of dollars and released senior extremist leaders to convince Islamist militants to free the girls who were handed over to the government at a remote location in northern Nigeria early on Thursday morning.

Boko Haram has waged a violent insurgency for seven years but has been weakened by significant losses and a major internal power struggle in recent months.

Experts say it is unlikely the girls would have been released by the group, which has split into two major factions, without a “significant incentive”.

Ryan Cummings, a security analyst in South Africa, said it was very unlikely Boko Haram would have released any hostages without a significant reward.

“Why hold the girls for two years and then release them for nothing? It simply doesn’t make sense … and is totally contrary to what we know about the group,” Cummings said.