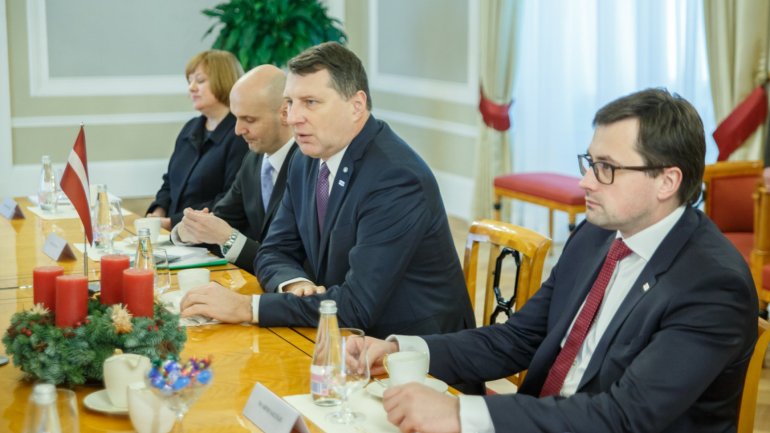 President of Latvia, Raimonds Vejonis, has expressed his full support toward Republic of Moldova's European track and declared that he sees it as a partner within the European Union, encouraging authorities from Chisinau to continue implementing reforms.
The declaration was made during the meeting of President of Moldovan Parliament, Andrian Candu, at Riga Castle with President of Latvia, Raimonds Vejonis.
"You must be firmly set to develop the country, we support your European track. Reform are necessary, because people must feel comfortable in their own home. We are ready to share our knowledge and experience, so that Moldova will have an easier time integrating within Europe" Raimonds Vejonis said.
The official from Chisinau has expressed his gratitude toward Vejonis, for his hospitality and for Latvia's constant support for Republic of Moldova within international organizations and European institutions.
"Connecting energy with European Union, infrastructure development of roads, promoting justice system reforms, fighting against corruption. We wish to win back the citizen's trust in an European future for Republic of Moldova, a direction we will specify in the Constitution. We want to make sure that no political force or personal interests will waver Moldova from its European track after next year's elections" Andrian Candu declared.
During 4 - 5 December, President of Moldovan Parliament, will be on an official visit to Riga, at the invitation of his counterpart, Saeima's president, Ināra Mūrniece.
AFLĂ imediat Știrile Publika.MD. Intră pe Telegram