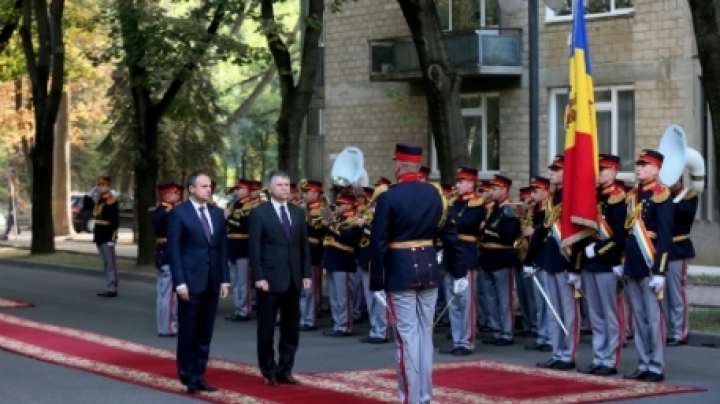 Hungary will continue to support Moldova's European integration path, considering that our country should have a clear and predictable chance at the EU accession, that demonstrates the capability of development.

The statement was made by the President of the Hungarian National Assembly, László Kövér, on a visit to Moldova at a meeting with Parliament Speaker, Andrian Candu.

"The visit will give new urge to the intensification of Moldovan-Hungarian interparliamentary cooperation. There is a strategic partnership of cooperation between the Moldovan Parliament and the Hungarian National Assembly, enshrined in the agreement signed in 2012, and relations intense level of parliamentary committees" , said Andrian Candu.

During the meeting the Speaker referred to the reform agenda it has pledged Moldova by implementing consistent and punctual operation of the Association Agreement, current developments in the country and priorities of government, as well as efforts to strengthen dialogue with Gagauzia and region Transnistria.

Andrian Candu's expressed the interest of the Moldovan Parliament to take over the best practice of the Hungarian Parliament in the European integration process and implementation of the acquis communautaire.

"The priorities of the government related to the implementation of the Association Agreement, the return to cooperation with the IMF, judicial reform and fighting corruption, strengthening energy and agriculture. Moldova is still looking for the best European models in these areas, which have demonstrated effectiveness in time. We are open for Hungary to take over from models that worked better and gave results" , said Andrian Candu.

In turn, László Kövér reiterated Hungary's support for the European course of the Republic of Moldova, considering the progress of our country, through the implementation of about 90-per-cent of measures and commitments under the Roadmap for the reform agenda priority, signed by Parliament and Government .

"Hungary advocates for EU enlargement. The EU must give chances to the states wanting to demonstrate the desire and capacity development, and Moldova should have a clear and predictable chance of joining the EU" , said Hungarian Speaker.

László Kövér announced that by the end of the year, a delegation of the Foreign Policy of the National Assembly of Hungary will visit Moldova for a transfer of best practices in the field of European integration Moldovan parliamentarians.

President of the Hungarian National Assembly, László Kövér is on a visit to Moldova in the period of September 20 to 22, 2016.

Thursday, September 22nd, Speaker of the Hungarian has planned a visit to Gagauzia.