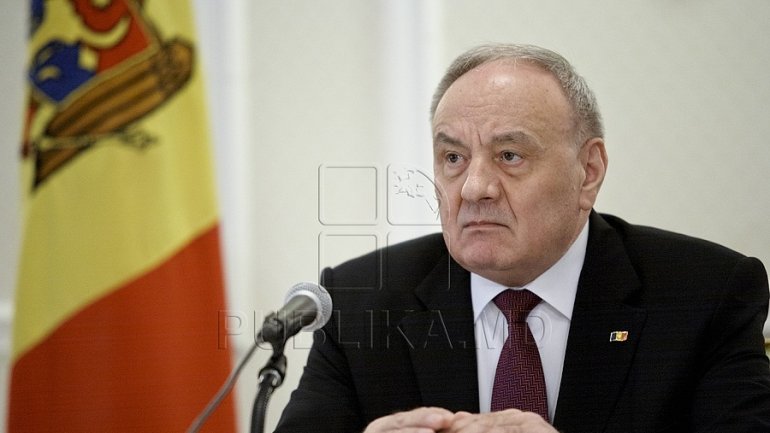 Moldovan President Nicolae Timofti had a meeting today, November 17th, at the State Residence, with the members of the diplomatic corps, accredited in our country, according to the presidential press service.

The president gave a speech in which he spoke about the challenges and achievements of its mandate and appreciated the support from external partners in the advancement of the European agenda, thanking the context Ambassadors who contributed to deepening the dialogue and bilateral relations.

We present the speech of the President Nicolae Timofti:

I wish that today's event to be less formal than those usually held by the President of the Republic.

I must admit that after 35 years in the field of justice, I am convinced that there is a field as complex and sometimes more complex - politics.

I have never ever thought that I will finish my career by enacting laws and designating prime ministers.

4 years and 8 months in a solemn atmosphere, but also extremely exciting for me, with my hand on the Constitution and the Parliament and the Constitutional Court, I vowed to devote all my strength and skill advancement to defend democracy, sovereignty, independence and territorial integrity of Moldova.

I became the first president without a party and without a political doctrine. Thanks to this, I think, I can consider myself a fair President.

I tried not to violate the constitutional norms. To not jeopardize the democracy, the balance of powers and fundamental rights of its citizens.

In my capacity as President, elected by parliamentarians, I wanted to keep the presidential institution outside any political games. I have worked hard to be a President-goal, not a partisan player in the frequent political disputes that have threatened the unity of our society.

Perhaps I was the most popular president in the national media. Some consider that I was "sparing of words", My argument is simple: do not accept empty words without substance.

And it was not a blemish, but a principle which I have assumed coming into this function.

However, the presidential institution categorically ruled on the fundamental issues, avoiding them on the episode. I communicated with the society, whenever necessary, in the manner and form generally practiced by institutions.

I leave with a contented heart. I have always acted with determination in the interest of the citizens. We serve people, not the party.

My mandate as President expired by the national mission continues. I assure you that I a remain pro-European citizen with confidence that we will finish what we started.