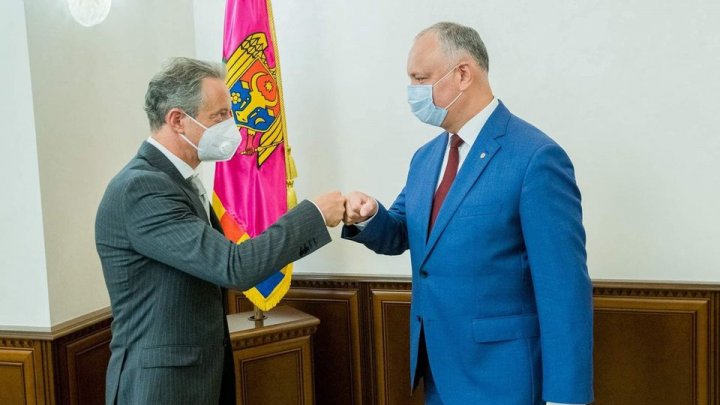 The head of state, Igor Dodon, had a working meeting today with Claus Neukirch, head of the OSCE Mission to Moldova. Officials discussed a wide range of issues regarding the interaction between Moldova's leadership and this international organization, as well as the OSCE's work on the territory of the Republic of Moldova.

At the same time, they also discussed the launch of the presidential campaign in Moldova.

"In particular, we talked about the participation of the OSCE and the ODIHR in monitoring the electoral process. We stressed that the Republic of Moldova is interested in good cooperation with OSCE observers.

In this context, I mentioned the importance of the strengthened position of international partners, which has been expressed countless times in previous years in the Joint Declaration of the OSCE Council of Ministers of Foreign Affairs. The document emphasizes that a comprehensive, peaceful and lasting settlement of the Transnistrian conflict must be based on the sovereignty and territorial integrity of the Republic of Moldova within its internationally recognized borders, with a special status for Transnistria, with guaranteed respect for political rights, economic and social needs of the population of the region. ", Dodon wrote on his Facebook page.

Igor Dodon also mentioned that he discussed with the head of the OSCE Mission about the results of his meeting with the leader of the separatist regime in Tiraspol, Vadim Krasnoselski.

"We also analyzed the results of the meeting we had at the end of July with the leader of Transnistria, Vadim Krasnoselski, stressing the importance of further implementing confidence-building measures. In this context, we exchanged views on the preparation of the next rounds of consultations in the format "5 + 2". ", wrote Dodon.