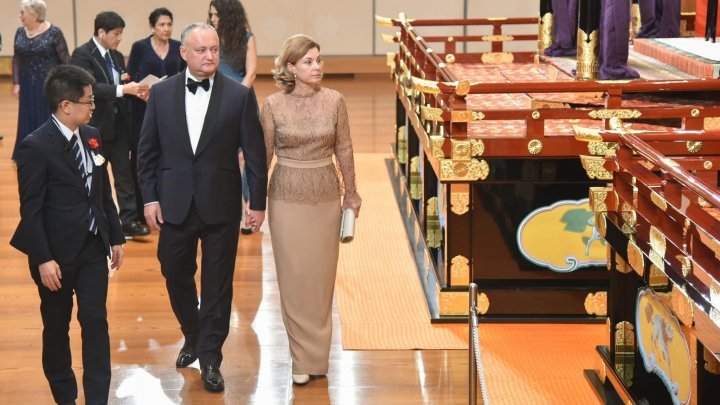 In an official visit to Japan, the President is accompanied by 10 people, including his brother and his sister-in-law, writes Omega Agency which refers to reliable sources inside the State Chancellery, quoted ziarulnational.md.

As the presidential press service has reported, Moldova's President Igor Dodon together with First Lady Galina Dodon attended a ceremony of appointment of His Imperial Majesty, Naruhito of Japan.

In addition, the President is accompanied by 10 people, including his brother and his sister-in-law, writes Omega Agency which refers to reliable sources inside the State Chancellery, quoted ziarulnational.md.

According to the quoted source, Igor Dodon did not just take his wife, as stipulated in the protocol, but went to Japan with the whole family - the children of the head of state, the president's brother and sister-in-law, his Foreign Policy adviser, “ a bodyguard that is his relative", a protocol advisor and the institution's photojournalist.

"The entire "tourist group" to Japan on taxpayers' money is made up of 11 people," mentioned Omega.

Moreover, it cost around 20,000 euros for the airline tickets alone.

"Also, the expenses are calculated for accommodation for those who accompany Dodon."

"It is not for the first time that Igor Dodon's taken his family on an official visit. At the beginning of 2017, the Government gave up the procedure regarding the publication of the names of the members of the delegation accompanying the head of state. Thus, the expenses of Dodon's travels were secreted, ”notes Omega.

The head of the State Chancellery, Andrei Spînu, told ziarulnational.md that the institution he heads was not responsible for the visit of the President of Moldova to Japan.

Asked by ziarulnational.md, Carmena Sterpu, the main consultant within the Presidential Press Service, made some clarifications regarding this topic.

"The presidential institution partially covered travel expenses in Japan for only four people, including foreign policy advisor, chief of protocol and press service. Some of the expenses were covered by the Japanese side, ”the quoted source pointed out.