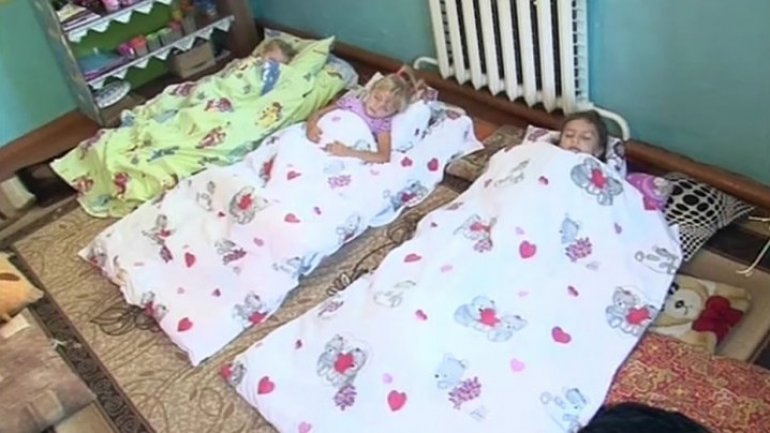 Several children from kindergarten in Frumuşica village, Cahul district are forced to sleep at noon on the floor.

This's because the institution did not receive the furniture in time which was actually ordered in July.

The institution's administration blames on the firm who should have sent them the furniture on July 28.

On the other hand, the company's representative said they did not violate anything as no delivery deadline was mentioned in the contract.

The kindergarten did operate for six hours per day but had to comply with order issued by Cahul district Council that, starting from September 1, the institution had to open for 10 hours instead.

In order for children to benefit better conditions, 15 beds and 14 tables were purchased which cost 50,000 lei allocated by the District Council.

"We met with the District Council and told them I could not receive the beds. Then they blamed on me, explaining because I allocated all money at one, it should have been only 10 per cent," said Stela Olaru, director of the kindergarten in Frumuşica village.

Because there are no beds at noon, children are forced to lie down on mattresses on floor.

About 15 children stay in the kindergarten every day, the rest are taken home by their parents.

Some parents have to accept the situation because they have to work all day.

"I will pick them up in the evening, so I have to leave them resting like that. I have to earn money and work all day".

But others take their children home at noon.

The furniture company says they do not have cars to bring the furniture to the village, even though they have already paid 2500 lei for transport.

"You have two options, we bring the furniture without assembly and assemble it on the spot, or wait 3 or 4 days for free cars."

The nursery director says that if she does not receive the necessary furniture this week, she will pay her own money to rent a car to bring the children's cottages. That would cost the woman around three thousand lei.

Besides, officers from the Cahul District Raional Directorate do not seem to know what is going on in Frumuşica.

"It already works at ten and a half hours, but de facto it does not work because it does not have furniture, but we hope that by the end of September we will receive the furniture and the kindergarten will work at a normal pace", said Avram Micinschi, head of the Cahul District's Education Directorate.

There are now 45 children in the kindergarten.