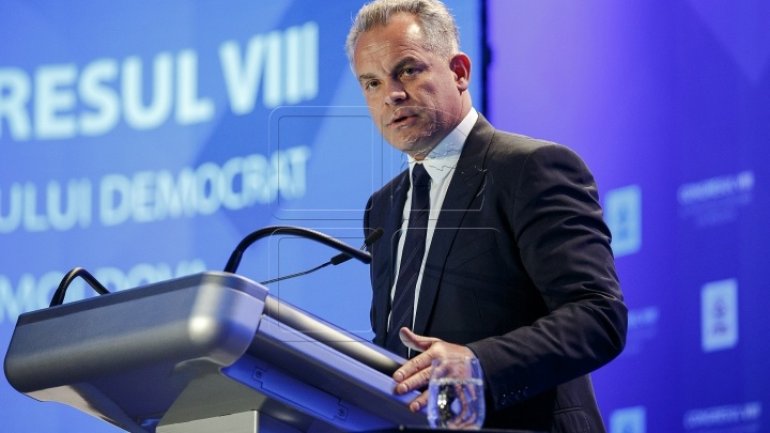 The president of the Democratic Party (PDM), Vlad Plahotniuc, has posted his biography on his blog. The politician has disclosed information about his life and work the media have not covered up to now. The Democrat leader tells about his childhood, studying years, about how he has managed to become a successful businessman. For the first time, Vlad Plahotniuc shows pictures of him from his personal archives.

He had a beautiful and very active childhood and since he was little he had the feeling that the day is too short and the night is too long, He didn’t have enough time then, and he doesn’t have enough time now. For this reason, afternoon naps were his childhood nightmare and so was going to bed early. Today he enjoys the freedom of sleeping 3-5 hours a night, he has singlehandedly made his day longer on the account of making his night shorter.

Ever since his school years he had a competitive spirit and the wish to do more than was required of him. Actually he thinks this also was a desire to exceed his limits, all the time he thought he could do more. To this aim however he needed an intense gathering of knowledge and this is what made him love to learn.

He didn’t learn for grades and praises, he learned in order to understand as many things as possible and to be able to use them while living the pleasure of competition in district Olympiads where he always got the top places. Being teachers, his parents had an extraordinary method to motivate him and make him see school not as an obligation, but as something useful. Since childhood he had big ambitions and they taught him how to reach them by capitalizing on what school had to offer.

As for his personal motivation, it was always related to his passion and desire to succeed in what he was doing. He tried everything in order to discover what he likes and what is of use to him. His childhood passions were connected to music, sports and reading. He went to musical school for 6 years, he practiced various sports, but the one that gave him great satisfaction was weightlifting, which also brought him the second place in the junior league, under the guidance of an international master of this sport.

He was not a spoiled child, they were 6 children and the needs were big, there was no place for spoils. They had their parental love and it was enough for them. Their Our family’s issues and needs taught them what it means to help each other, to work in a team, help their parents around the house and treasure what they obtained following our work.

He enrolled the Polytechnic by circumstance, but he never regretted this. When he came to Chisinau to join a University, he actually wanted to study law. He has however found out that in order to enter the law department he had to have finished his military service or hold a two-year work experience, two conditions he didn’t fulfill. So he oriented himself to the one with most candidates per place, having the most complicated enrollment contest.

Even though he initially planned to study for another specialty, he at least needed a true competition that would mobilize him to succeed in entering. He had succeeded. However, his student life started for a brief moment until they enlisted him in the army.

Upon returning from the army, he continued studying at the Polytechnic for a while, to finish his studies, even if he didn’t see his future in that field. Thus, in the mean time he decided to look for new challenges, new perspectives. Later he entered the world of business and started making the first money in commerce and service activities, a totally new activity for him, to understand which he had to dedicate all his time and energy. This determined him to take an academic break, and later he came back and graduated from the Polytechnic University, and later fulfilled his wish to study law, when his path became clearly oriented towards the world of business.

At that time, the field of business was a very unclear one, he had to make a lot of experiments till he understood it. As many other compatriots, he travelled to former Yugoslavia before the war, carrying tools for which were demanded there, that he sold on the Belgrade and Macedonia markets. These were extremely difficult times, there was a tough struggle for a place on the respective market, with individuals who used very aggressive methods, controlling the market through terror. They were many, he couldn’t have coped if he were to also answer with aggressiveness. This made him think and then he realized, once again, how superior the mind, good organization and team spirit are against violent methods.

He also tried a business practiced by many Moldovans at the time, the one of video rooms, then he started his first serious business—a printing house, where he invested a lot of energy and it was the first business bringing him good and constant income, he used to print labels for a number of wineries in Moldova and abroad and at a certain point they have diversified their activity and became among the biggest importers of glass products for the wine and cans industry in the Republic of Moldova.

That’s when the real world of business started for him, he learned then how a business project is built gradually, from scratch, how it develops, what it means to have a big number of employees for whose lives you are responsible. He also understood then what efficient organization means and he took these concepts and knowledge not only from books but from real life, inclusively from the errors he made.

Further he managed businesses in Romania, where he used to sell printed goods, then Italy where he managed a construction company with approximately 300 employees.

By 2001 he was already a proven businessman with experience and an enormous wish to achieve more. That year he was given the opportunity to develop the Republic of Moldova Petrom Company from zero. He accepted this proposal and after a few good years of work, Petrom-Moldova became a leader on the Market of the Republic of Moldova and one of the main state budget contributors.

Next he went into the tourism, media and real-estate business which he could already hand-over to a team of young professionals he formed, most of which are still with him today.

He entered politics in 2010, but he was involved in this field a lot earlier. Especially in 2007-2009 he repeatedly supported a number of then opposition leaders, since he wanted the Republic of Moldova not to be a country with a Communist doctrine, he wanted the foreign businessmen he was meeting not to tell him about the Communist regime we had then.

He considered that Moldova needed profound change and to choose a Western development path and model, on that proved its efficiency in other former Communist state. His decision caused him enormous damage at that moment, including certain repercussions to him and his family, however he did not give up, knowing that the purpose is vital for the Republic of Moldova.

In 2010, he decided to get actively involved in politics and be a candidate on the lists of the Democratic Party from Moldova in the parliamentary elections. He did this when he understood that in politics there is need for organization and coherence in actions. With his colleagues in the PDM they managed to efficiently reorganize the party locally, to make it the only party with organizations active across the country.

Now together with his colleagues they intend to successfully finalize modernization process of the PDM which would become a democratic functioning model, a party that would represent as many Republic of Moldova citizens as possible.

His long-term ambition is to transform this country into a modern state, where people would want to learn, to create families, to work and where they could age in decent conditions. He wants to set the basis of constant progress for Moldova, a progress that would be insured, guaranteed even after their departure. Until now, all his great projects were successful, regardless of how lengthy and hard the path was, regardless of obstacles.