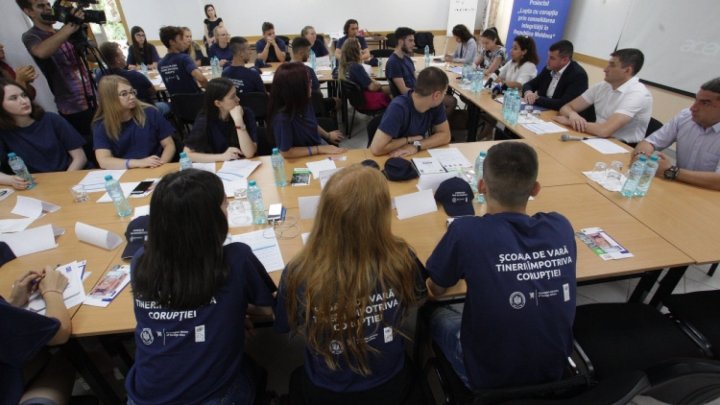 30 young people from Moldova and Romania are participating a seven-day school on anti-corruption at a pension in Vadul lui Vodă. It's first time for such event held in Moldova.

During this period, volunteers will discuss the mechanism to prevent and combat against corruption along with officers of Romanian - Moldovan National Anti-corruption Center (CNA).

Silvia Moraru, a participant who obtained law bachelor degree, thinks that the youth plays an important role in preventing the corruption.

"Young people are the ones who will stop corruption with our professionalism", said Silvia Moraru.

According to Ion Pruteanu, the CNA Chief of Directorate of Anti-corruption Education, there will be a visit to the CNA headquarter and offers of special mission.

Romanian volunteers said that the corruption problems are generated not only in Chisinau but also Bucharest.

"This phenomenon is well-known and omnipresent. There should be a tough combat against this", said a participant.

"The situation of Romania and Moldova are not so much different because we are close countries. The corruption presents not only in Moldova but also in Romania", said another participant.

This project is held with the support of UNDP, in partnership with CNA and with financial support of Norwegian Foreign Affairs Ministry.