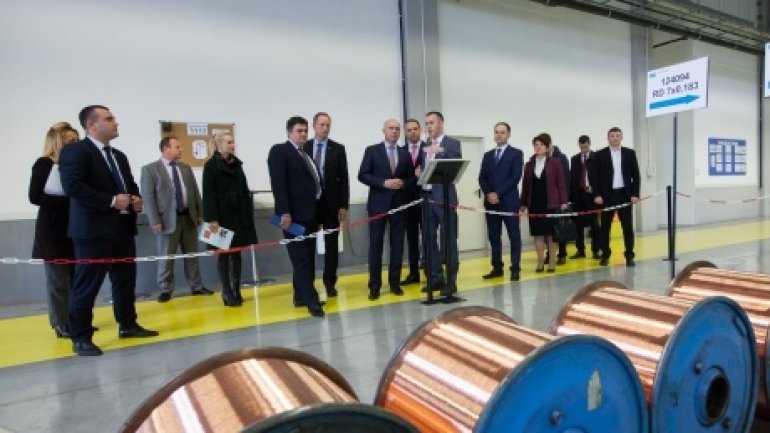 Prime Minister Pavel Filip paid a visit to the Free Economic Zone (FEZ) Balti, where he discussed with contractors about the problems they faced, their plans to expand affairs and measures to be taken by the authorities to facilitate the investors’ work.

The visit began at Austrian company Gebauer and Griller which specializes in producing automotive and telecommunication wires and cables. During the meeting, the company management announced that due to government’s measures in supporting the FEZ Balti activity, the company has been expanding its investments in Moldova. As such, the Austrian investors will build a new production plant wiring with an area of approximately 10 thousand square meters and create 500 new jobs.

The prime minister welcomed the company's decision to expand its work, noting that the government team would continue to encourage investment activities in Moldova.

"When you have questions or problems, you must knock at the door, it is always open. I want to establish a platform for continuous communication between investors and government. Thank you for your decision to expand your business, nothing can be more important to executive than creating good-paid jobs for citizens," Pavel Filip said.

At their turn, the Austrian company representatives mentioned that for business development they need three important elements: skilled employees, safe activity and authorities’ support in Moldova they have found all these conditions and are determined to continue their work in our country, sustain investors.

Also today, the prime minister visited Draexlmaier Automotive company’s new plant construction site, where he observed the production facilities being already in operation. The company currently has 2,600 employees and plans in early 2017 to start a new investment project in FEZ Balti sub-zone two. Due to investments of over 20 million euros, there will be created around 2,500 new jobs.

Free Economic Zone Balti was founded in 2010 and has managed 11 sub-zones, which are located in three Moldova’s regions. The companies developing their activity in FEZ Balti benefit from a range of facilities including the fiscal and customs ones.
AFLĂ imediat Știrile Publika.MD. Intră pe Telegram