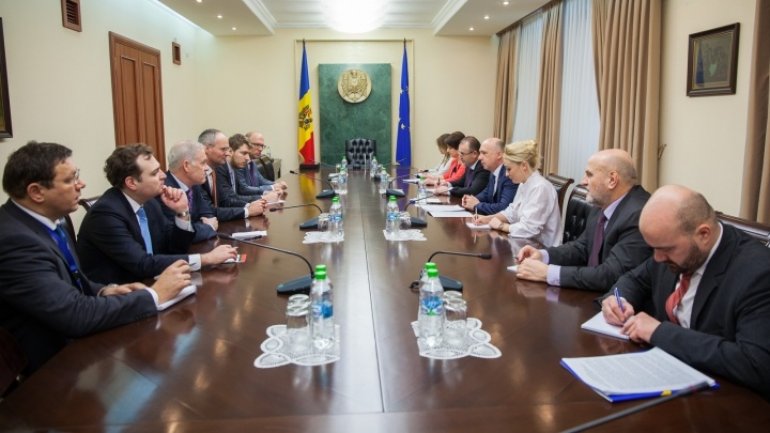 Prime Minister Pavel Filip has met with the special envoy of the OSCE president-in-office for the Transnistrian settlement, Ambassador Wolf Dietrich Heim.

The Premier expressed his gratitude to the last year‘s German presidency of the OSCE, which contributing to resume, after two years, the talks in the 5+2 format, to holding the conference in Bavaria regarding the trust-building measures, and to adopting appositive declaration on the 5+2 talks, at the OSCE Ministerial Reunion in Hamburg.

The Premier opines positive dynamics was noticed, although not all the set goals were attained, particularly because of the elections on the Dniester’s both banks.

However, 3 sectorial documents were signed: the Protocol in hydrometeorology, the Protocol in fishing management and sustainable usage of the Dniester’s water, and the additional Protocol on freight trains passing through the Transnistrian sector.

"I hope this year will be successful in the Transnistrian settlement," Pavel Filip said.

Wolf Dietrich Heim has confirmed the OSCE’s availability to continue its efforts in the 5+2 format: "I personally prefer to focus on small solution, though with impact. Not necessarily with political substratum, but concrete actions, with correct directions."

Referring to the plans for 2017, Premier Pavel Filip has pointed out removing the artificial obstacles in free traveling of civilians, goods and services between the two banks of the Dniester, creating the due conditions for the good functioning of the Romanian-language schools in the Transnistrian area, unlocking the farmers’ access to their fields over the Dniester.

Wolf Dietrich Heim has congratulated the Government for approving the Strategy on strengthening the interethnic relations in Moldova, 2017-2027 and expects an Action Plan on studying the Holocaust.