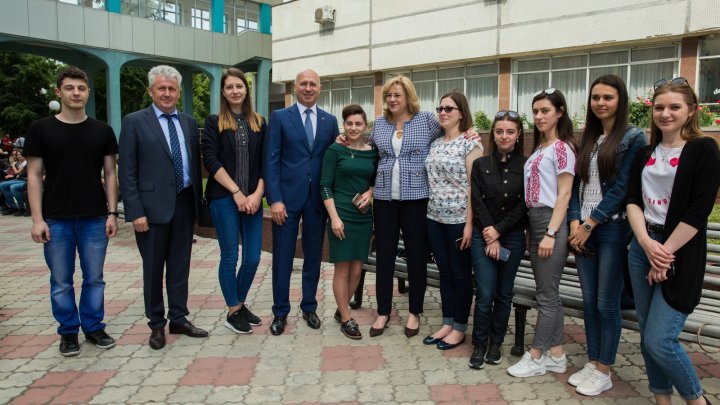 Premier Pavel Filip and European Commissioner for Regional Policy, Corina Crețu, encouraged students to benefit fully from EU projects to obtain European quality studies and directly contribute to the development of the Republic of Moldova. The declaration was made today in the public lecture held by officials at the Academy of Economic Studies of Moldova.

Discussions focused on the European agenda of our country, regional development and the benefits of EU integration for citizens, especially for young people. The prime minister said that the implementation of the Association Agreement is the main priority of the Executive, and in order to bring citizens' lives as close as possible to living standards in the EU, the authorities are promoting an ambitious reform agenda.

Referring to the objectives for the next period, Pavel Filip emphasized the personal attention he gives to the fields of justice, infrastructure and education.

"We can not look into the future without coming up with a very clear vision of what we should do to have a qualitative education. We can not continue on the same programs that have been so far, because the education we received in the industrial age is no longer in the informational one. It is necessary to see what must be the curriculum and what the young people born in the informational age are oriented to, "the prime minister said, stressing in this regard the importance of working with the EU.

The European Commissioner for Regional Policy reiterated the EU's openness to support the education sector, noting that young people are an important part of the relationship between the Republic of Moldova and the European Union.

Corina Creţu talked about the ERASMUS + program, which has already benefited over 800 students and teachers from our country. The European official also mentioned the EU's willingness to contribute to creating better living conditions, with a focus on the development of localities:

"The Republic of Moldova is a country that we want to help and which we want to meet as soon as possible as part of the EU family ".

Dialogue between officials and students was sincere and constructive. Young people have asked more questions about EU regional policy, projects to be deployed in localities, capitalizing on European funds, and development opportunities for students. As a key area for the economy, as well as for the training of specialists, the IT industry was mentioned. Students have proposed the creation of mixed clusters with young people from EU Member States to exchange experiences on European integration.

At the end of the dialogue, the Prime Minister launched the idea of organizing a meeting between the Cabinet of Ministers and young EU ambassadors to discuss the problems in society and the solutions proposed by young people to overcome them.