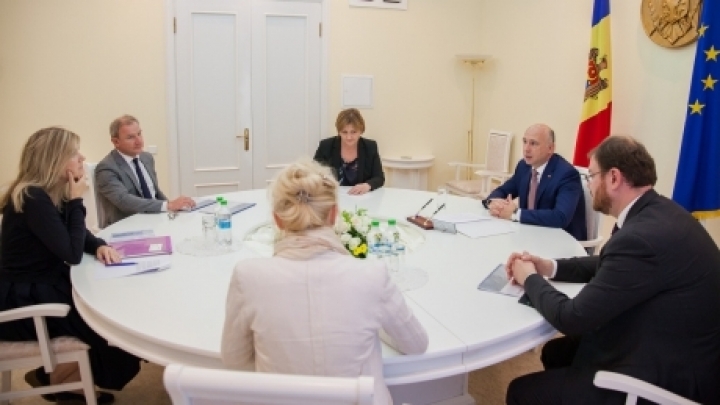 Prime Minister Pavel Filip today had a meeting with representatives of Rothschild Bank, Arielle Malard de Rothschild and Pierre Cailleteau. The sides considered opportunities of cooperation between the Moldovan authorities and the Rothschild company, Moldpres reports.

The PM hailed the presence of one of the strongest financial groups of the world in Chisinau. “We know that Rothschild is a bank with traditions, with offices in the principal international centres and which is specialized in financial counseling, investments, capital markets. We are interested in services of such partners, so that Moldova comes back to international financial markets, becomes more attractive for investors, so that we create new jobs and ensure the country’s economic development,” the prime minister said.

For their part, the Rothschild bank’s representatives referred to the experience in diverse countries, noting that its experts cooperate with authorities of more European states, including Romania, Serbia, Poland, Greece, Hungary. Arielle Mallard de Rothschild and Pierre Cailleteau voiced willingness to discuss with all specialty institutions from Moldova, in order to identify potential trends of cooperation and settle problems concerning the re-establishment of Moldova’s financial system, as well as to work out a long-term financial strategy of the government.

In the context, Pavel Filip said the principal goals of the cabinet were to maintain Moldova’s European integration, promote priority reforms and resume the external financing. Filip noted that an eventual cooperation with the Rothschild bank would be a positive signal for foreign development partners and would bring more trustworthiness to the Moldovan financial system.

The Rothschild Bank is one of the biggest and most influential investment banks worldwide; it was set up in London in 1811, and presently has over 50 representations all over the world.