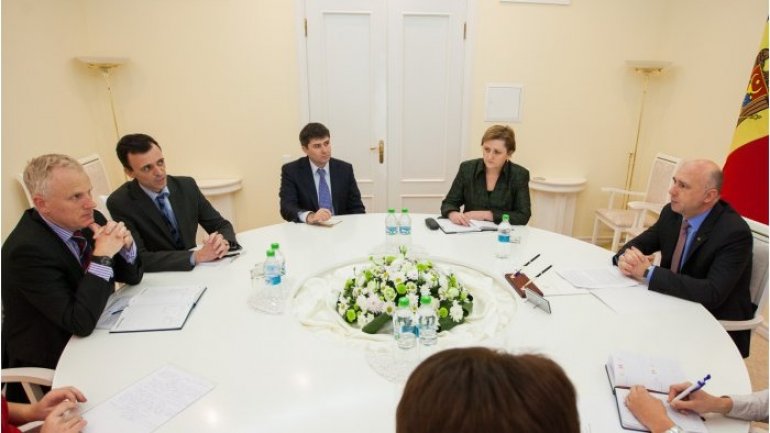 Prime Minister Pavel Filip today had a meeting with Head of the World Bank Office in Moldova Alex Kremer. The PM welcomed the dynamic character of the World Bank-Moldova cooperation. Filip highlighted a recent visit by WB Vice President for Europe and Central Asia Cyril E. Muller, which he described as a proof of respect and confidence in the Moldovan authorities, according to Moldpres.

The prime minister thanked the World Bank for the support provided to negotiate the Agreement with the International Monetary Fund, as well as for the decision to unlock the financing of the Development Policy Operations program (DPO-2) in the competitiveness sector till late 2016.

”The World Bank has been and will remain a strategic development partner of Moldova, with essential support and contributions to implementing the agenda of reforms and social and economic development of the country,” Pavel Filip said.

For his part, Head of the World Bank Office in Moldova Alex Kremer gave assurances that WB would further back the government to carry out the reforms’ agenda. The official specified that Moldova was among the world leaders in terms of digitalization of public services. Presently, over 400,000 citizens benefit from electronic services and it is important to maintain and develop these services, the head of the WB Office in Chisinau said.

In the context, Alex Kremer encouraged the cabinet to actively participate in public consultations on working out a new Framework of Partnership of the World Bank with Moldova for 2018-2022. Prime Minister Pavel Filip assured that the government would actively take part in these discussions, noting that the cabinet had every determination to press ahead with the reforms’ implementation and relied much on the World Bank’s support to this end.

As for the public administration reforms, Pavel Filip expressed the cabinet’s interest in the creation and ensuring the work of the State Tax Service in a modernized format. The PM also stressed the importance to implement the project on modernizing the governmental services, which is vital for carrying out the public administration reform and promoting the electronic governance.

“When we worked out the government’s reform, we paid special attention to public services – what should we do to make the latter as accessible as possible to the residents. Therefore, we ruled to create an agency in which all public services are concentrated,” the prime minister noted.

In the context, Pavel Filip specified that it was necessary not only to digitalize the services, but also to reorganize and modernize the processes. So that the citizen does not have to present diverse certificates to institutions. According to the Digital Moldova Strategy-2020, the only document of the citizen in relation with the state should be the identity card, and the rest of the information about the citizen should be found in the electronic database,” the PM said. Pavel Filip gave assurances that the government would do its utmost to achieve this ambitious goal.

So far, the World Bank has earmarked Moldova over one billion dollars to carry out 60 projects. At present, the WB has ten active projects with an overall budget of more than 350 million dollars.
AFLĂ imediat Știrile Publika.MD. Intră pe Telegram