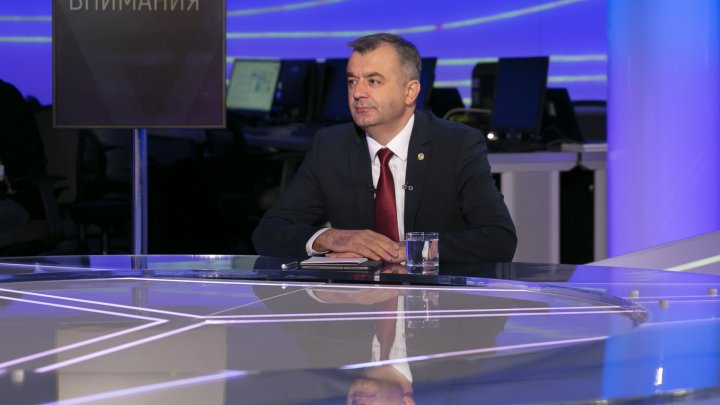 Premier Ion Chicu was of the opinion that the early release of former PM Vlad Filat from prison could have been proceeded with deviations. However, this matter has to be cracked by the court, he added. Besides, he also touched other hot topics such as the gas issue and the Chisinau Arena multi-functional complex in the talk-show În centrul atenţiei on Publika TV.

According to him, the former government led by Maia Sandu would have been involved in the legal process of releasing Vlad Filat.

"Without figures of influence, the responsible structures would not have created the commission and addressed the lawsuit", said the Prime Minister Ion Chicu.

He worriedly claimed there was a scheme meticulously planned.

"In July, his sentence was shortened almost two years because he was being jailed in allegedly inhuman conditions. Although the photos of his cell which pointed to the real conditions were published. At the end of October, the sentence was further reduced 27 days. It was a scheme drawn up to facilitate his release", said Ion Chicu.

Publika TV earlier disclosed the video footage in which President Igor Dodon admitted the Socialist Part had been largely funded by Russia which broke the Moldovan law.

Now Viorel Morari, the chief prosecutor of the Anti-corruption Prosecutor's Office, said he personally checked the materials and declared the annulment order was baseless.

"I'm sure that the Prosecutor's Office is now dealing with the videos. The fact that the institution already initiated the criminal proceedings points to its independence and its determination to carry out this investigation", PM Chicu commented.

Regarding the gas issue, PM Chicu said the prospect of the Russian gas supply after January 1, 2020 remains uncertain. In the meantime, the Government is examining three alternative options, which could affect tariffs. While the negotiations between Russia and Ukraine on gas supply could last till next year, he said.

"The first scenario is the gas supply through the Transbalkanic corridor, through the Turkish Stream. The second backup is the direct purchase from other suppliers such as Romania or Europe. Finally, the reserve which will be used for a certain period but will not be sufficient for the whole season".

As for tariffs, Ion Chicu said that it is still premature to make forecasts in this regard, but did not rule out that they could be modified.

"The tariff will vary depending on which scenario we will apply. The best option is to purchase direct gas as it is so far".

Consumers now who use up to 30 cubic meters a month pay a tariff of 4.70 lei without VAT, and those with a higher consumption pay 4.89 lei per cubic meter of gas. Currently, the Republic of Moldova buys gas from Russia at a price of $ 220 per thousand cubic meters.

Chisinau Arena multi-functional complex was also discussed by the head of Moldovan cabinet. According to him, its inauguration may take place in April, 2020.

"The project is practically finished. It was put off unfortunately in the summer. I see there were fierce attacks against the project", said PM Ion Chicu.

According a press release of the Government, there will be tests applied on the infrastructure and equipment that ensure the functionality of the sports complex. Once the complex is opened, the Moldovan athletes will be able to train in the country.

The construction work of the multi-functional complex was started in October, 2018 in the presence of the Filip Government and former Parliament President Andrian Candu, who initiated the project.

Chisinau Arena covers an area of ten hectares and will have a capacity of 5,000 seats. The complex will have a multipurpose room, Olympic pool, Aqua Park, Tennis Club, open summer pool, which will turn into winter ice rink, and a modern parking lot. The construction works are carried out by a company from Turkey, based on the public-private partnership. The total estimated costs amount to over 43 million euros.