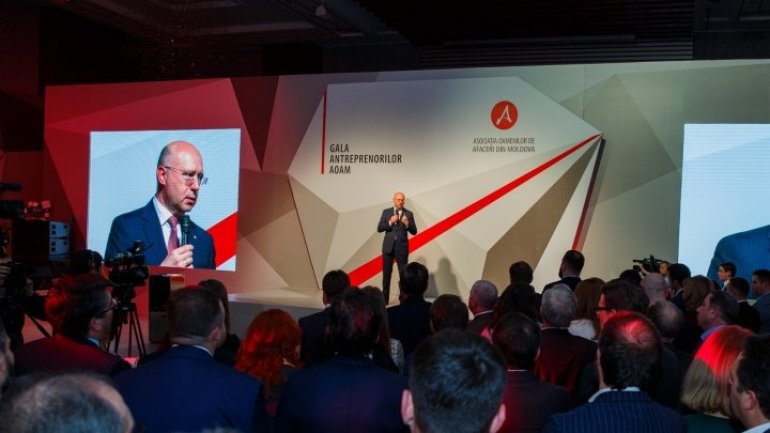 Prime Minister Pavel Filip participated in the second edition of the Entrepreneurship Gala, organized by the Association of Moldovan Businessmen (AOAM). The event was attended by 400 entrepreneurs.

The Prime Minister made a retrospective speech about the measures taken by the Government to create favorable conditions to the business environment.

Pavel Filip talked about reducing the number of control institutions, as well as ensuring the predictability and transparency of state controls. In this context, he recalled the removal of more than 60% of the permissive acts and their release from April 2018 through the single window.

The prime minister referred to other results obtained on the platform of the Economic Council alongside the Prime Minister, including the AOAM contribution. Among them: the improvement of the Labor Code, the facilitation of the issuance of work permits for foreign citizens, the abolition of the stamp duty.

Particularly, the initiative to adopt a bill to eliminate the power abuse in institutions against economic agents, which will contribute to the fight against corruption, has been revealed.

"This encouraging reform represents the real fight against corruption because if you want to get a result, you must not only talk about problems but also its cause. Through this bill, we will eliminate the causes", said the Prime Minister.

At the same time, Pavel Filip expressed the openness to ensure an efficient dialogue between the authorities and the business environment.

"Only when we join our efforts, we will make the necessary reforms. We have set ourselves the goal of developing the Republic of Moldova economically, that the business people feel good, paying the state budget and thus we have achieved an objective important for us - to make social investments ", concluded Pavel Filip.

During the event, ten entrepreneurs received grants from AOAM to develop their businesses.