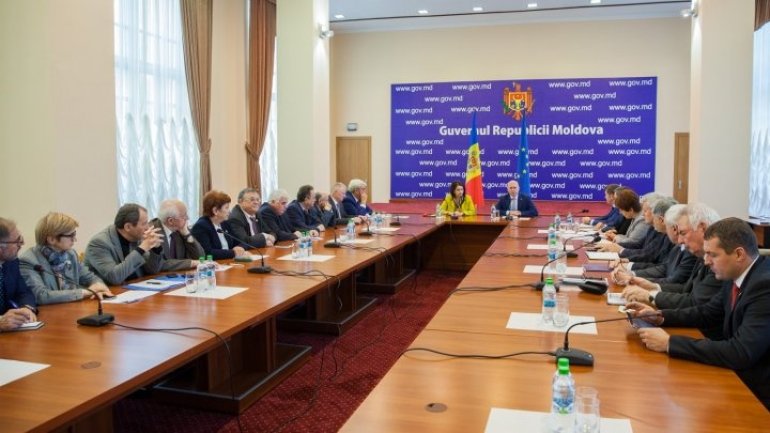 Prime Minister Pavel Filip today met with members of the Sciences Academy of Moldova where he discussed the objectives and particularities of the reform on national system of research and innovation, promoted by the Executive.

According to the premier, the reform bases on the recommendations by European experts, who evaluated the national system of research and innovation, and the promoted modification implements a new vision for the development in the field.

Moreover, the Head of government enunciates that the project will receive double financial resource, from 157 million lei to 340 million lei and the finance will be realized through competitions where attract scientist individual, scientist group, science universities and institutions.

The reform envisages changing the way the organization of the research system is organized. Thus, the research institutes, which are currently subordinated to the ASM, will become independent and autonomous public institutions, and the Ministry of Education, Culture and Research will exercise their founding capacity.

At the same time, the ministry will be responsible for policy development, while the National Agency for Research and Development, which will be subordinated to the Government and coordinate the implementation process and set priorities for financing and developing science.

"The Academy of Sciences must be a forum of the smartest people who form the visions of the national development, consult and guide the Government, but not deal with the administration of the patrimony," said Prime Minister Pavel Filip.

Minister of Education, Culture and Research Monica Babuc said that the system reform is absolutely necessary and assured that the good elements will be preserved and the defective ones will be eliminated so that the research projects will be adjusted to current needs.

In the dialogue, academics welcomed the reform process and were open to participate in the process. Likewise, the representatives of the scientific community highlighted the importance of developing an effective mechanism for implementing the reform and mentioned the need to ensure transparency in the work of the authorities in the field of research and innovation.

It also addressed the issue of motivating young people to pursue a career in science.

At the end of the meeting, Prime Minister Pavel Filip urged academics to get involved actively in the process of drafting policy documents, stressing that it is very important that the country's development reforms come from people who know very well the realities.