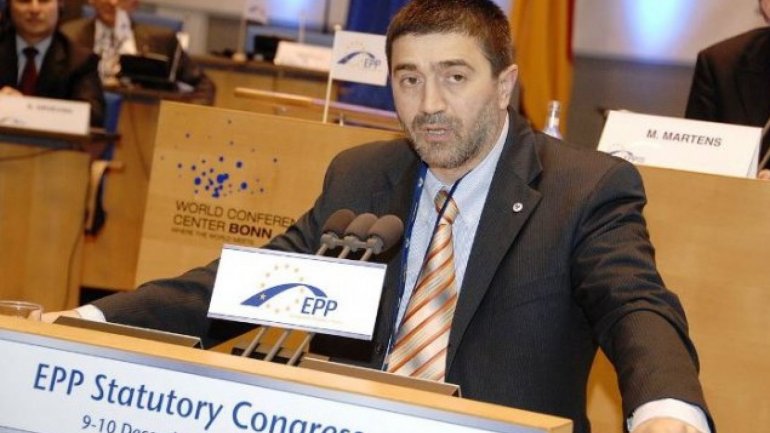 Timpul newpapres has published an analysis of PPE's errors in Moldova, about how bad decisions can ruin a success story.

Although we never would have though that this document will bring many doubts, well known PPCD and its leader, Iurie Roşca, remained in the history of Republic of Moldova as a bad example, as Moldovan associates with the biblical image of the traitor Judas in the politics of Chisinau, we shall mention only some "achievements" of the first party that PPE has given to Moldova.

After 2005 PPCD, a Romanian, unionist and pro-Western party that advocated the integration of Moldova into NATO, became the main ally of Vladimir Voronin's Communist Party. In 2005-2009, Rosca was given from Voronin, for betraying his voters and supporting the communist, pro-Russian and anti-Western government, the title of the Parliament's vice-president. Just over a few months after Daul's message in June 2009, Iurie Rosca was appointed by Vladimir Voronin as Deputy Prime Minister in charge of justice and law enforcement in the Grecean's Government.

The Second "Story of Success" without a happy ending. Vlad Filat

After the forceful removal from office of Voronin and the exponent of PPE Rosca (political binomial called by the symbolic Chisinau press, VoRoşca), PCRM and PPCD, from the government after the 2009 elections the Alliance for European Integration (AEI), PPE has given Moldova another party for the Government, the Liberal Democratic Party, led by Vlad Filat, who has assumed key positions in alliance governance, the prime minister and the most important governmental portfolios. Neither PPE's second try to gain political power has proved to be efficient.

Although information was leaked for the public and EU about the disaster brought by the Filat's government in several areas, including justice, fiscal services and customs administration, but especially about the involvement of the former prime minister of Chisinau , alongside Ilan Shor and raider Veaceslav Platon, in the "robbery of the century" at "Banca de Economii", which has already been irrevocably proved in court, the PPE maintains its support for the PLDM. On December 1, 2014, the same Joseph Daul congratulated Vlad Filat and PLDM for the outcome of the parliamentary elections, encouraging the Liberal Democrats to assume their leading role in a new pro-European alliance of governing. The "success story" in Moldova continues for EPPs after the stolen billion.

Moreover, Belgian Nicolas Briec, PPE Secretary of Foreign Affairs, is sent to Moldova, serving as advisor to Vlad Filat, at PLDM's headquarters in Chisinau, in the middle of ransacking Banca de Economii and attacking the banking system, Briec left only after Filat was detained by the Anticorruption Officers. According to leaked information from ongoing inquiries, the EPP consultant was paied by Filat in cash, just as with the counselor from USA, Molly McKew, also employed by the PLDM leader, about whom information and documents were published in the media that they were been paid out of the stolen money through offshore companies.

In January 2015, PPE welcomed the constitution of the minority alliance in Chisinau, encouraging Vlad Filat and Iurie Leanca to form a PLDM-PD governing alliance without PL and Voronin's Communists. "Although this is not the most comfortable situation, it is now up to the new Alliance to set up a new government to meet both the expectations of Moldovan citizens and those of the European Union. I appeal to the PLDM and PD to make a government in the shortest possible time, who will know how to bring together all those who believe in the European future of Moldova and want to contribute to the success of the country, using the Parliament "Joseph Daul said in January 2015, even if the ALDE leader Graham Watson was against the constitution of a pro-European alliance without liberals in Chisinau.

Just over a year after Ilan Shor's self-declaration and consequently Vlad Filat's arrest by the Anticorruption officers and the PLDM's withdrawal from the government in January 2016, the PPE suddenly changed its rhetoric from "Moldova - a success story" to one of harsh opposition to the government in Chisinau, which no longer had PLDM, the party that the EPP has given. Even if this was the same PD, a group of former PLDM members and the liberals backed by the ALDE group in the European Parliament. In just a few days, the "success story" with PLDM in government became "story of failure".

A few months after raider Veaceslav Platon was arrested in Kiev, further radicalizing the position of PPE. The group has positioned itself as a lawyer of Vlad Filat and of the entire penitentiary gallery implanted in the "robbery of the century" and the Russian Laundry Launched by Chisinau MoldIndConBank. The PPE has begun to victimize all of them, from Vlad Filat to Plato's assistant Mihail Gofman, putting pressure on the Chişinău government to stop the persecution, contrary to the very democratic European principles, of separation of powers in the state. We remind you that Veaceslav Platon, the one who helped to support the adventurist PPE lawmakers, is none other than the raider who washed through Moldova between 2012 and 2014, under the cover of former Anticorruption department chief Mihail Gofman and other accomplices , more than 20 billion US dollars from Moscow under the protection of special Russian services.

Following an aggressive lobby launched by the Kazakh oligarch, Mukhtar Ablyazov, an open dialogue, generously funded by the stolen billion from Kazakhstan, Ukraine and Russia, PPE deputies accept successive delegations from Chişinău to Strasbourg and Brussels, these visits being used for Russian  propaganda, organized by Kremlin against Moldova, to regain back it's influence. Ablyazov's Foundation takes turns in lobby trips to the PPE politicians, propagandists and media advocates favoring pro-Russian politicians, such as Renato Usatii and his acolytes, detached from the wing of the radical Communists, the so-called "Taliban" from Chisinau, Grigore Petrenko, Aleksandr Petkov and Alexei Tulbure.

It happened when Chisinau was shaken by the so-called "common opposition protests", financed and logistically supported by Moscow. It was the time when PPE sent new politician to Chisinau, Maia Sandu, who together with other PLDM descendants founded the Party of Action and Solidarity and the DA Platform lead by Andrei Nastase, godson of the oligarch Victor Topa and Moscow-financed pro-Russian parties, Our Party of Renato Usatii and Igor Dodon's Party of Socialists. These protests and the intense pro-Russian propaganda encouraged the Eurosceptic provisions in the Moldovan society, increased Dodon's rating, and eventually led to his election by direct vote as president of the Republic of Moldova, which constituted one of the claims common protests.

Therefore, after two PPE exponents in Moldova, Iurie Rosca and Vlad Filat, together with their parties, PPCD and PLDM, effectively disappear from the political scene in Chisinau, the group of Europeans becomes a place of refuge not only for pro-Russians, becoming renegades in Chisinau and those involved in the "robbery of the century", but also for all sorts of crimes in the Republic of Moldova.

Curiously, most of those who have benefited from the last few years of supporting the political family of Europeans have serious problems with the law. One of the frequent guests to the PPE deputies is Ana Ursachi, controversial lawyer from Chisinau. She is accused of a murder case, previously confiscated and bound by Ministry of Justice. When he saw that the mystery was discovered, Ursachi fled abroad. Her protection shield becomes the same as in the case of Rosca, Filat, Plato and Usatîi, the European People's Party.

Ursachi defended several employees of the Department of Penitentiary Institutions in Chisinau in court, suspected that they were favored by the burglary's group of criminal authorities, the so-called "thief in law" Makena. Then, the Taliban communist Grigore Petrenko defended him in court. She represented him in a case where the former deputy was accused of provoking mass violence and disorder during the protests in Chisinau. The crimes for which Petrenko's other two buddies, the activists of the pro-Russian radical Antifa, Mihail Amerberg and Pavel Grigorciuk, are judged.

Later, the lawyer also provided her services for Renato Usatîi, considered to be an agent of Russian special services, under whose protection he is hiding in Moscow by Interpol, being sought for the assassination attempt of Russian banker Gherman Gorbuntov in March 2012 in London. It happened after Usatîi was detained by the Chisinau Information and Security Service, being suspected of intercepting the talks of some dignitaries and politicians.

The list of interlopes defended by the one presumed to be by Chisinau's press "the devil's lawyer" continued with Veaceslav Platon, the raider convicted for diversion and money laundering from Banca de Economii and the one who organized money laundering through the banks in Chisinau within Russian Laundry Laundromat. Ursachi was a lawyer for Plato not only in courts, but also in lobby visits to PPE lawmakers, the latter not only accepting the visits of the raider's lawyer who attacked the Moldovan banking system and washed through Chisinau more than 20 billion from Moscow, but also involving in the law and campaigns pressuring the law institutions in Chisinau, for the benefit of the defendant Plato.