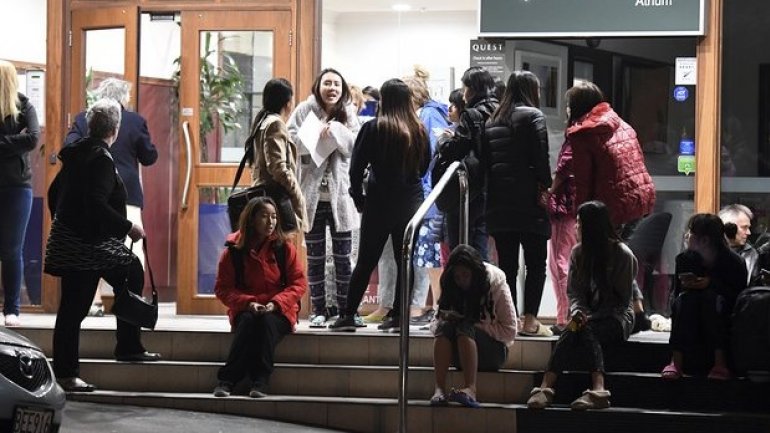 "We don't have any indications at the moment to believe it will rise, but we can't rule that out," Key told reporters in Wellington, adding that details of the casualties were still being confirmed.

Key said a military helicopter was being dispatched to the coastal tourist town of Kaikoura, near the epicenter of the 7.8 magnitude quake, some 91 km north-northeast of Christchurch in the South Island.

(UPDATE 20:24) New Zealand Police said at least one person has been killed in a powerful earthquake that struck the Pacific country early on Monday, reports Reuters.

"One casualty has been reported at a collapsed property in Kaikoura," NZ Police said in a statement.

The coastal tourist town of Kaikoura is near the epicenter of the 7.8 magnitude quake, located some 91 km north-northeast of Christchurch in the South Island.

(UPDATE 18:12) The country’s Civil Defense Minister Gerry Brownlee has just confirmed the first casualties from the earthquake in the town of Kaikoura, on the east coast of New Zealand’s South Island.

(UPDATE17:12) There have been at least 45 aftershocks since the first 7.5 magnitude quake shook New Zealand awake shortly after midnight, reports the Guardian.

Of these aftershocks, Geonote, the New Zealand monitor, has recorded five severe quakes, ranging from magnitude 5.6 to 7.5; and nine further quakes registered as “strong”.

(14:27) An earthquake of magnitude 7.4 has struck near Christchurch, New Zealand, triggering a tsunami warning, reports Mirror.

The quake hit 95 km north east of the city, which is on the east coast of the country's South Island.

It struck in the early hours of Monday morning in Christchurch which was reduced to rubble by an earthquake just five years ago.

The New Zealand Ministry of Civil Defense and Emergency management tweeted: "Situation has changed - tsunami is possible. People near the coast in the south island should move to high ground or inland."

Power lines and phone lines are said to be down, including emergency lines to police, fire and ambulance services.

Others reported that the emergency number 111 was back up and running.

The earthquake was felt as far away as Auckland, Wellington, Nelson and Hamilton.

Well-wishers from around the world sent their best wishes to the stricken country which has been devastated by earthquakes over the years.

Islanders could face aftershocks which often follow the main quake.

They can cause further building damage and falling debris.

A Christchurch Police spokeswoman told Stuff.co.NZ they hadn't received any calls about damage.

"Just be careful on the roads in case there's damage," she said.

St John Ambulance says they have no reports of injuries from the quake.

"We are monitoring the situation but at this stage we have not activated our emergency operations centre (EOC)", they said.

"We encourage everyone to check on their neighbors, family and friends, especially those who live alone or are frail. It is also important to have your emergency kit, torch and other emergency supplies ready."