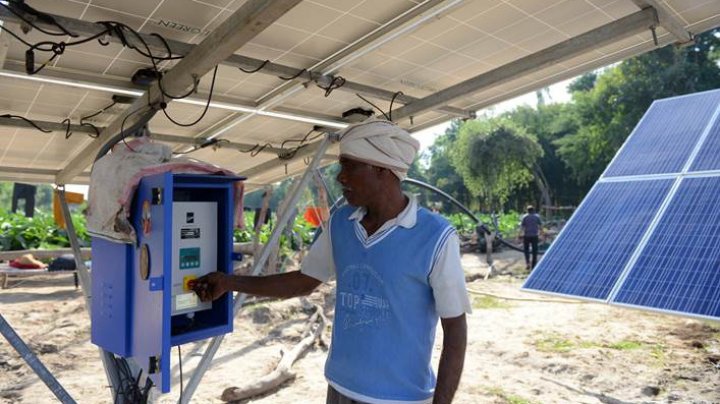 Solar powered irrigation systems are now an affordable and climate-friendly technology for both large and small-scale farmers in developing countries.  But they need to be adequately managed and regulated to avoid the risk of unsustainable water use, FAO stressed in a new report published today.

Sharp and ongoing drops in the price of photovoltaic panels give new impetus to the renewable energy source as a way to enhance irrigation capacity. Further price reductions could power a revolution in places such as sub-Saharan Africa, where only three percent of the cultivated area is irrigated, seven times less than the global average.

FAO presented a global overview of the benefits and risks of solar-powered irrigation at an international forum in Rome  hosted in partnership with Powering Agriculture: An Energy Grand Challenge for Development (PAEGC), theInternational Fund for Agricultural Development (IFAD), the International Water Management Institute (IWMI) and theResearch Program on Water, Land and Ecosystems (WLE).

Both FAO's global report and an online Toolbox on Solar-Powered Irrigation Systems, developed jointly with Germany's Gesellschaft für Internationale Zusammenarbeit and designed to provide hands-on guidance to end-users, policy makers and financiers, were launched at the conference.

"The opportunity cheaper solar energy offers also increases the urgency of making sure appropriate water management and governance systems are in place," said Eduardo Mansur, Director of FAO's Land and Water Division. "We need to think strategically about how this technology can be used to encourage more sustainable use of groundwater resources to avoid risks such as wasteful water-use and over-abstraction of groundwater."

Globally, about 20 percent of cultivated land is irrigated, and they contribute to about 40 percent of total food output.

Solar powered irrigations systems indicate the potential to reduce GHG emissions per unit of energy used for water pumping by more than 95 percent compared to alternatives fuelled by diesel or fossil-fuel driven electricity grids, according to FAO's report.

Assessing the economic viability of a solar-powered irrigation system today requires consideration of a broad range of parameters, including the size and configuration of the system, water storage capacity and feasibility, the depth of the well, the remoteness of the area and the type of soil to be irrigated. The so-called "payback periods" for such investments depend on the above conditions, on crops and markets, and also on the presence of government price incentives.

FAO urges governments to review their incentive schemes to favor "green subsidies" over those for fossil fuels.

Solar irrigation pumps could also cause unsustainable groundwater extraction, as farmers may seek to expand planted areas or switch to more water-intensive crops. About 30 percent of aquifers in India, for example, are already considered at critical status.

While tailored drip irrigation can lead to water savings, assuming it will automatically do so at the farm level is a fallacy, the report says. Irrigation policy decisions should be taken after proper water accounting over larger territorial areas, as rainfall, surface water, groundwater, soil moisture and evaporation processes linked to different land uses are all part of the same hydrological cycle.

Modern solar-powered systems offer useful tools to improve water governance, with electronic controller devices able to provide real-time inputs regarding storage tank levels, pump speed and borehole water levels that could ultimately trigger regulatory decisions to pre-empt excessive use remotely. India and Egypt are both experimenting with such an approach.

A viable alternative is to set water charges in relation to supply and demand calculations determined with satellite and thermal imagery, a technique made easier even at the level of individual fields by the FAO Water Productivity Open-access Portal (WaPor).

One of FAO's cardinal recommendations for the greater use of solar-powered irrigation is to ensure that no water is withdrawn without an appropriate water management plan in place.

There's work to do on that front. A survey of technical experts from 25 countries suggest that while three-fourths of nations have government programmes and policies to promote small-scale irrigation, fewer than half have specific regulations limiting groundwater abstraction for such purposes.

Solar panels produce energy even at times when no irrigation is needed, opening up significant opportunities to run rice huskers, mills, water purifiers and cold storage units, all contributing to rural development and incomes. In some cases, solar power can also become a "remunerative crop" if farmers are encouraged to reduce overpumping water by opting to pool and sell their surplus energy to the electricity grid.