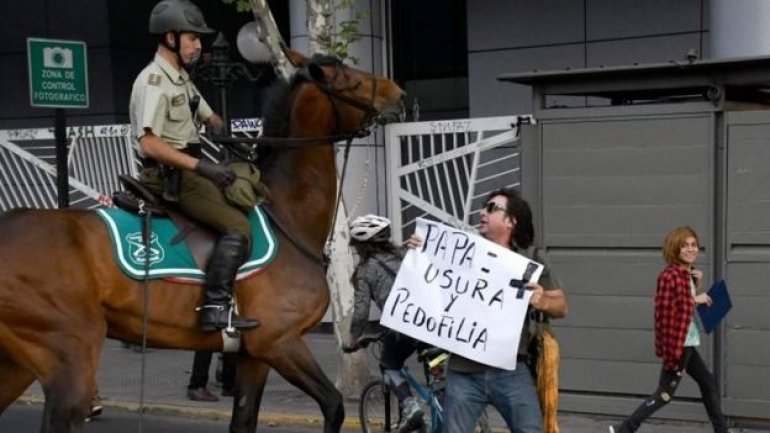 Pope Francis has arrived in Chile on a visit overshadowed by child sexual abuse accusations against almost 80 members of Chilean clergy, wrote bbc.com

Some priests have been convicted by the Vatican's court, but protests against an alleged cover-up are expected during the pontiff's three-day stay.

The highlight of Francis' visit will be an open-air Mass in the capital Santiago on Tuesday.

The Pope will also meet victims of Augusto Pinochet's dictatorship.

The 81-year-old Argentine pontiff will then travel to Peru on Thursday.

This is Francis' first visit to Chile since he became pope in 2013.

He was met by President Michelle Bachelet at Santiago's airport on Monday.

Ahead of his arrival, several churches in the country were attacked or vandalised.

When recently asked to evaluate Pope Francis on a scale of 0 to 10, Chileans gave him a score of 5.3, the lowest ranking for any Pope.

Trust in the Roman Catholic Church as an institution fared even worse, polling at just 36% - the lowest in Latin America.

With such a low rating, it is not surprising that before boarding his plane from Rome, the Pope asked his congregation to pray for him.

It is estimated that more than 60% of Chile's population identifies itself as Christian, and 45% belongs to the Roman Catholic Church.

It is the second most secular country in Latin America. Some 38% of Chileans regard themselves as agnostic, atheist or non-religious.